Save This Word!
noun
a natural stone bridge in S Utah: a national monument. 290 feet (88 meters) high; 275 feet (84 meters) span.
QUIZ
SHALL WE PLAY A "SHALL" VS. "SHOULD" CHALLENGE?
Should you take this quiz on “shall” versus “should”? It should prove to be a quick challenge!
Question 1 of 6
Which form is used to state an obligation or duty someone has?
shall
should
TAKE THE QUIZ TO FIND OUT

What else does Rainbow Bridge mean?

Just this side of heaven, some believe, is a place called Rainbow Bridge, a place where pets go after they die. Rainbow Bridge is used as a term for “pet heaven.”

How is Rainbow Bridge pronounced?

What are other forms of Rainbow Bridge?

Where does Rainbow Bridge come from?

The Rainbow Bridge comes from a vignette written by an unknown author in the 1980s. It tells the story of a beautiful place with a rainbow bridge to heaven. After death, pets go to this place and are restored to perfect health. They have endless food and water, and remain there until their owner dies. When this happens, pets and owners are reunited and travel along the Rainbow Bridge together into heaven.

Over the years, three people have claimed to have created the Rainbow Bridge. Paul C. Dahm, who owns a copyright on a version of the poem, says he wrote the original prose poem in 1981. He also published a 1998 book entitled Rainbow Bridge.

Wallace Sife says his poem “All Pets Go to Heaven” is the real origin of the Rainbow Bridge and included it in his 2005 book, The Loss of a Pet. William Britton published a book that contains the poem, his 1994 Legend of Rainbow Bridge.

Regardless of who actually wrote the story, the Rainbow Bridge has provided comfort to an untold number of grieving pet owners. Members of pet-related internet groups have been quoting versions of the story since at least the early 1990s.

How is Rainbow Bridge used in real life?

The Rainbow Bridge is a comforting story and concept shared among pet owners during bereavement. It is used as a stand-in for an afterlife for pets, and pets are spoken of as “crossing over” as a metaphor for going to heaven—and as a euphemism for dying.

She was with me for 14 years, which is technically more than half of my lifetime thus far. Run wild and free over the rainbow bridge ❤️ pic.twitter.com/eYh449yKbI

Artist renderings of the Rainbow Bridge are also popular ways to cope with grief. 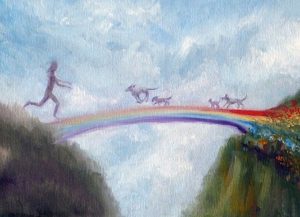 “I know that profuse pain personally, having seen two cats and four dogs, all Boxers, cross over the Rainbow Bridge over the last 12 years or so.”

How to use Rainbow Bridge in a sentence