Save This Word!
See synonyms for renewable resource on Thesaurus.com

Any resource, such as wood or solar energy, that can or will be replenished naturally in the course of time.

QUIZ
GOOSES. GEESES. I WANT THIS QUIZ ON PLURAL NOUNS!
Test how much you really know about regular and irregular plural nouns with this quiz.
Question 1 of 9
Which of the following nouns has an irregular plural form?
cactus
wallet
goat
party
TAKE THE QUIZ TO FIND OUT

What is a renewable resource?

A renewable resource is a natural resource that is unlimited or that is naturally replenished rather quickly, such as sunlight or water.

It can be hard to imagine that something we use every day may eventually be gone forever. But this is true for most of the common resources we use for energy production, such as oil and uranium (which is used in nuclear power). In both cases, it would take thousands or millions of years for these to be replenished through natural processes. This makes them nonrenewable.

Just because something is natural and abundant doesn’t mean it’s renewable. We take rocks out of the ground for all kinds of uses, but there is a limited amount. This can make them valuable, but it also makes them nonrenewable.

What are real-life examples of renewable resource?

Sunlight, water, wind, and geothermal power (power generated from the heat inside the earth) are all renewable resources often discussed as potential energy sources. 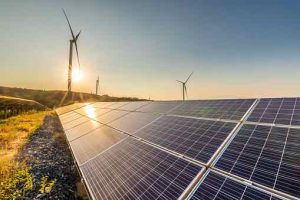 To add on to this, plastic is a waste of natural resources. Crude oil being a non renewable resource should be conserved for essentials such as transport, food and lighting.

It’s National Hydropower Day! Did you know hydropower was only 7% of total U.S. electricity generation in 2018? In City Light's service area, 91% of our power comes from this clean, renewable resource. #HydroDay #NationsGreenest pic.twitter.com/MXuWtvvZ41

What other words are related to renewable resource?

How to use renewable resource in a sentence