[ shoots-shtah-fuhl ]
/ ˈʃʊtsˌʃtɑ fəl /
Save This Word!
noun German.
an elite military unit of the Nazi party that served as Hitler's bodyguard and as a special police force. Abbreviation: SS
QUIZ
QUIZ YOURSELF ON "IS" VS. "ARE"
"Is" it time for a new quiz? "Are" you ready? Then prove your excellent skills on using "is" vs. "are."
Question 1 of 7
IS and ARE are both forms of which verb?
have
be
TAKE THE QUIZ TO FIND OUT

What was the Schutzstaffel?

The Schutzstaffel was created by Adolf Hitler, the ruler of Germany from 1933 to 1945. The Schutzstaffel supervised the German concentration camps and secret police (the Gestapo) and were directly responsible for many other atrocities committed during World War II. Because of this, the Schutzstaffel is often remembered as the most powerful and notorious division of the Nazi party.

Why is Schutzstaffel important?

Schutzstaffel is German for “protection squad” and its original purpose was to serve as personal bodyguards for Hitler and other leaders of Hitler’s Nazi party.

At first consisting only of eight men, the Schutzstaffel eventually grew to a membership of hundreds of thousands and played a direct role in many of the events of World War II. The SS eventually had the authority to execute policies or activities that were normally illegal according to German law, such as murdering Hitler’s political or ideological enemies, overseeing the concentration camps, murdering prisoners of war, and many other war crimes.

At the end of World War II, the Schutzstaffel was officially named a criminal organization during the Nuremberg Trials. The Schutzstaffel has remained one of the most hated organizations in the modern era, and SS members were hunted down and killed even decades after the war ended.

Adolf Eichmann, a Schutzstaffel officer and planner of the Holocaust, is the only person to ever recieve the death penalty in Isreal. Eichmann was abducted from Argentina by Isreali officials in 1960 and executed in 1961 following a brief, controversial trial in Israel.

What are real-life examples of Schutzstaffel?

This photograph shows members of the Schutzstaffel marching during a rally: 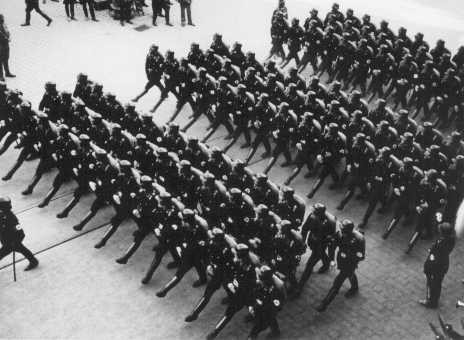 Outside of insensitive or offensive commentary, the Schutzstaffel is most often mentioned in a historical context or to hyperbolically compare something to it.

Seventy-four years later, Alan Moskin still grapples with the hatred he witnessed as an 18-year-old — not just among the feared Schutzstaffel, better known as the SS, and the Hitler Youth. https://t.co/5jP2LrmwvF

Difficult not to make a connection with the Schutzstaffel (SS) paramilitary death squads of Nazi Germany, same symbols, same ideology..

What other words are related to Schutzstaffel?

The Schutzstaffel was a group of elite soldiers who were involved in the concentration camps, among other duties.