Save This Word!
noun
an amendment to the U.S. Constitution, ratified in 1791 as part of the Bill of Rights, guaranteeing that the forced quartering of soldiers in private homes would be prohibited in peacetime and allowed only by prescribed law during wartime.
QUIZ
SHALL WE PLAY A "SHALL" VS. "SHOULD" CHALLENGE?
Should you take this quiz on “shall” versus “should”? It should prove to be a quick challenge!
Question 1 of 6
Which form is used to state an obligation or duty someone has?
shall
should
TAKE THE QUIZ TO FIND OUT

What is the Third Amendment?

The Third Amendment is an amendment to the US Constitution that forbids the government from forcing citizens to allow soldiers to live in their homes at all during peace and only when allowed by law during war.

“No Soldier shall, in time of peace be quartered in any house, without the consent of the Owner, nor in time of war, but in a manner to be prescribed by law.”

In other words, the government cannot force you to quarter (house) soldiers in your private home.

That seems obvious, doesn’t it? For all of American history to date, the federal government has maintained enough military bases and barracks for soldiers so that it doesn’t need to force citizens to house soldiers.

Why is the Third Amendment important?

Housing the military was one of the main motivations behind the American Revolution. The British wanted a large army present in the American colonies, and they wanted them housed in colonists’ homes. The American colonists didn’t want to have to pay for food and medicine for soldiers living in their homes and preferred to rely on local militias to protect them. The colonial governments argued that forcing their citizens to house soldiers was a violation of their colonial legislations.

The British ignored the colonists’ complaints and instead increased the number of soldiers sent to the colonies. This eventually resulted in the Boston Massacre of 1770, during which British soldiers killed several colonists. After the massacre, more colonists supported American independence, which led to the American Revolution.

While housing military personnel isn’t often an issue today, the question sometimes comes up when the US National Guard is deployed to an area without a military base nearby.

What are real-life examples of Third Amendment?

This engraving by Paul Revere depicts the Boston Massacre, an event that resulted from Boston colonists being forced to have British troops quartered in their homes, which the Third Amendment now explicitly forbids. 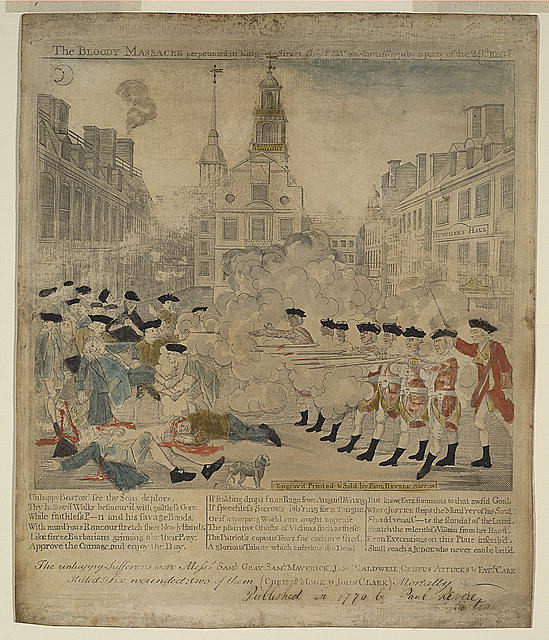 “The bloody massacre perpetrated in King Street Boston on March 5th 1770 by a party of the 29th Regt.” by Paul Revere / Library of Congress

While all Americans learn about the Third Amendment in school, it is largely considered irrelevant in modern times.

As an eighth-grader, I remember learning about the Third Amendment to the Constituion and saying to myself, well, that one can’t matter to anyone anymore.

To be fair, I think the clarity of the Third Amendment is part of the reason that it never gets violated

What other words are related to Third Amendment?

According to the Third Amendment, the government cannot force citizens to allow doctors to live in their home.

How to use Third Amendment in a sentence