[ zig-zag ]
/ ˈzɪgˌzæg /
Save This Word!
See synonyms for: zigzag / zigzagged / zigzagging / zigzags on Thesaurus.com
This shows grade level based on the word's complexity.
noun
a line, course, or progression characterized by sharp turns first to one side and then to the other.
one of a series of such turns, as in a line or path.
adjective
proceeding or formed in a zigzag: zigzag stitches.
adverb
with frequent sharp turns from side to side; in a zigzag manner: The child ran zigzag along the beach.
verb (used with object), zig·zagged, zig·zag·ging.
to make (something) zigzag, as in form or course; move or maneuver (something) in a zigzag direction: They zigzagged their course to confuse the enemy.
verb (used without object), zig·zagged, zig·zag·ging.
to proceed in a zigzag line or course.

We Asked: The Hardest Words You Have To Explain To Kids

Some words don't seem very complicated or unique ... until you have to explain them to your kid. This father gives us insight into a word he had to explain to his three-year-old, and it wasn't easy!

MORE VIDEOS FROM DICTIONARY.COM
QUIZ
SHALL WE PLAY A "SHALL" VS. "SHOULD" CHALLENGE?
Should you take this quiz on “shall” versus “should”? It should prove to be a quick challenge!
Question 1 of 6
Which form is used to state an obligation or duty someone has?
shall
should
TAKE THE QUIZ TO FIND OUT

OTHER WORDS FROM zigzag

What does zigzag mean?

A zigzag is a line of alternating, sharp up-and-down turns that form peaks and valleys kind of resembling the letter Z. 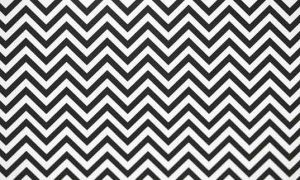 Getty Images. A pattern of zigzags.

As a noun, zigzag can also refer to a route or path that resembles this kind of pattern, as in The dragonfly moved through the air in a zigzag.

Zigzag can also be used as a verb meaning to move back and forth while traveling forward in a way that resembles this pattern, as in The dragonfly zigzagged through the air.

As a verb, zigzag is most commonly used in the context of physical movement, but it can be used in situations in which people keep doing different things, such as changing their minds. A much more common term for this is flip-flop.

It is also used as an adjective in phrases like zigzag pattern. In sewing, a zigzag stitch is a type of stitch that can be made by a sewing machine, such as to finish the edges of a garment. Some sewing machines use an attachment called a zigzagger to make such stitches.

Example: Some animals, like the hare, move in a zigzag pattern when escaping predators, making it harder for them to be caught.

Where does zigzag come from?

The first records of the word zigzag come from around the early 1700s. It comes from the French ziczac, from the German zickzack, which is based on the German Zacke, meaning “point” or “jagged projection.”

Zigzags have jagged points from the line sharply moving up and then back down. Sometimes, people use the words zig and zag by themselves to mean to move in one of the directions in a zigzag pattern. This is usually used in a somewhat humorous way, as in You zigged when you should have zagged! Both zig and zag came from zigzag (not the other way around).

What are some other forms related to zigzag?

What are some words that share a root or word element with zigzag?

What are some words that often get used in discussing zigzag?

How is zigzag used in real life?

Zigzag is commonly used as a noun, verb, and adjective. It’s typically used in the context of patterns and movements.

Who drew a zigzag and decided to call it a "N and why did someone draw that same zigzag sideways and call it a "Z"?

DYK when squirrels feel threatened, they run away in a zigzag pattern. This is a useful strategy to predators. Unfortunately, it doesn’t work so well on cars. Consider slowing down and giving squirrels a brake! More squirrel facts: https://t.co/U08Ld8V7db #SquirrelAppreciationDay pic.twitter.com/twzn2tBErj

CM Rasmussen re sidewalk policy: “This new rule means fewer people walking into traffic or zigzagging across intersections on their way home

Which of the following words best describes a zigzag?

A. even
B. straight
C. jagged
D. smooth

How to use zigzag in a sentence

zigzag
/ (ˈzɪɡˌzæɡ) /
noun
a line or course characterized by sharp turns in alternating directions
one of the series of such turns
something having the form of a zigzag
adjective
(usually prenominal) formed in or proceeding in a zigzag
(of sewing machine stitches) produced in a zigzag by a swing needle used for joining stretch fabrics, neatening raw edges, etc
adverb
in a zigzag manner
verb -zags, -zagging or -zagged
to proceed or cause to proceed in a zigzag
(tr) to form into a zigzag