Everything After Z by Dictionary.com
Previous Word: OTR
Next Word: OTW

Made a beat yesterday for the first time in ages. Came up with some fresh ideas but when I put it together it sounded crap. Oh well OTTNO
@TJonBASS, December 2012
Shortly after becoming the third player in NBA history to register a triple-double within the first four games of his career, Ben Simmons took to Instagram, where he posted the picture shown below, accompanied by a focused, forward-looking caption: #OTTNO
Brian Seltzer, NBA.com, October 2017 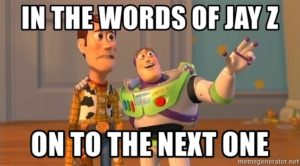 Where does OTTNO come from? 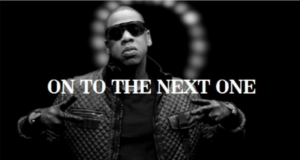 OTTNO can be traced back to September 2009, when Jay-Z released his 11th studio album, The Blueprint 3. The seventh track on the album is “On to the Next One,” about how Jay-Z is always looking to move onto bigger and better things.

The track name was shortened to OTTNO on Twitter shortly after its release.

In the 2010s, OTTNO became a popular hashtag for people seeking to advance their their lives in some positive way, especially after setbacks or to continue accomplishments. It spiked in popularity in 2017–18 thanks to its frequent use by the Philadelphia 76ers point guard Ben Simmons.

OTTNO doesn’t just do work for NBA and rap stars. It can be used to talk continuing a hot streak or bouncing back from such as challenges as relationship troubles…

Sick of it. Girl meets boy. Girl likes boy. Girl 'kicks it' with boy for a bit. Then decides it isn't working. Or maybe he does. Then #OTTNO

Thought I had the job but didn't get it *sigh* ottno….

…or even existential quandaries.

I think I'm just going to marry a chicken some day…. I would have a limitless supply of eggs! Till that bitch dies.. #OTTNO