What does WE mean?

WE is an internet abbreviation meaning whatever. It can be used as a simple replacement for the word or as a flippant remark—or, you know, whatever. WE occasionally stands for weekend.

Where does WE come from? 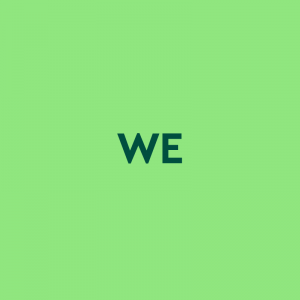 Whatever as a disinterested, dismissive, or sassy response dates back to at least 1965, when it was used that way in an episode of the TV show Bewitched. In 1995, whatever got a major boost as a kind of “Valley Girl” catchphrase in the teen comedy Clueless.

The internet, particularly chat rooms and messaging services like AIM, were very popular among teenagers in the late 1990s, and it didn’t take long for whatever to morph into the far-faster-to-type WE or lowercase we.

WE appeared in internet slang glossaries by 1999. When social media took off in the mid-2000s, chatters took many of their acronyms with them, including we.

IMHO - "In my honest opinion." This abbreviation can be used when your perspective on an issue greatly contrasts the general consensus. "Taylor Swift isn't that talented of a singer IMHO. Like, her music is catchy and w/e, but you know?" W/E - "Whatever." See above for proper use.
Chris Riotta, Mic, February 4, 2016
Doing the census today. Late to the party but w/e
@yourock_fyi, August 25, 2020
2020 gave you peak astrology content and ATLA on Netflix. Y’all can take a quiz and find out what element you’d bend and what poisonous cultural norms you’re unlearning with a group of misfits or look at the stars or w/e—It’s okay to take your Hogwarts house out of your bio.
@apapertrail, June 7, 2020
SEE MORE EXAMPLES

The phrase but WE, for but whatever, is often used when sharing art, cooking, or other creations as a way of saying, humbly, “I did this thing, and it’s not perfect, but I hope you’ll enjoy it anyway.”

Another really good prompt… wish I hadn't made the lines so chunky but w/e. pic.twitter.com/StXKZYEwWK

Some people use WE just to avoid typing extra letters, especially when characters are limited.

My biggest fear is not being successful in w.e path I choose..

Or WE, for or whatever, may be used to show that someone is unimpressed.

As a reply, WE can be rejective, as if to say “I think what you just said is stupid,” “You’re lying,” or “I just don’t care what you say.”

Whatever is sometimes abbreviated to WTV or W/E, though the latter is occasionally used for weekend in Europe.

I was at a party at the w/e * – met a very senior BBC news producer . He conceded that Corbyn is an obvious antisemite, but brushed it off – "I hardly think that most people care really". That deepens Corbyn's crime, I said. News Boy ran away to find some "splendid" wine #1930s

This is not meant to be a formal definition of WE like most terms we define on Dictionary.com, but is rather an informal word summary that hopefully touches upon the key aspects of the meaning and usage of WE that will help our users expand their word mastery.