😂 Face With Tears of Joy emoji

What does 😂 Face With Tears of Joy emoji mean?

Face with tears of joy is an emoji that represents someone laughing so hard that tears are streaming down their face. It can be used as an emotional-tone marker to express amusement and joviality when someone says or does something funny or embarrassing.

Where does 😂 Face With Tears of Joy emoji come from? 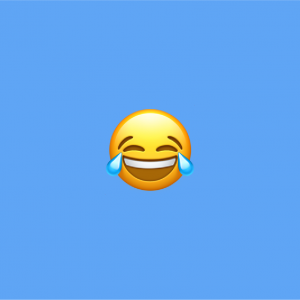 While officially named face with tears of joy, people commonly refer to it as the crying laughing, laugh cry, laughing tears, LOL, or simply the laughing emoji or face. Face with tears of joy was included as part of Unicode 6.0 in 2010 and added to Emoji 1.0 in 2015. It was also one of the first emoji available for iOS and OS X. Like all emoji, it was created based on a user suggestion.

'Wheel of Fortune' Player Has Gold Shower On the Brain via @TMZ https://t.co/XzxYf6wHlq😂😂🤣🤣😂🤣 pic.twitter.com/7E2PB0Z3mK

In 2016, linguist Gretchen McCulloch reported that the face with tears of joy emoji was the most used emoji on its own, in multiple-emoji sequences, and in combination with other emoji. “It’s clear we love to laugh and communicate laughter digitally!” McCulloch said.

Examples of 😂 Face With Tears of Joy emoji

how does it feel @maddow to know that you committed a felony tonight, and prooved [sic] @realDonaldTrump pays more tax% than @BernieSanders??
@KeithHewlett, March 2017
Everyone at my night job is short. So whenever we can't reach something it's just like, ‘Oh well.’
@DiamondStudded, March, 2017
I guess I can’t contain my competitive spirit Anyway, it’ll be fun……
Lou Musa, “Honored to be a part of the “Celebrity Special Olympics Basketball Game” tonight…….” Lou Musa, March, 2017
SEE MORE EXAMPLES

Who uses 😂 Face With Tears of Joy emoji?

Using the face with tears of joy emoji doesn’t necessarily mean the user’s literally laughing to the point of tears. Rather, the emoji can help lighten tone. Writing for Scientific American in 2016, Krystal D’Costa explained: “Much in the same way the Like button helped to confirm status and connections, the tears of joy emoji can be connective.” Face with tears of joy, D’Costa continued, can show empathy, soften emotions, lighten remarks, and facilitate communication.

While the face with tears of joy emoji generally has positive intent, it can also be used to mock or gloat over others’ misfortunes, as if laughing maniacally in their face.

Banksy might have just carried out the greatest ever troll of the art world 😂https://t.co/ae40tgwhVE