What does 😄 Grinning Face With Smiling Eyes emoji mean?

The grinning face with smiling eyes emoji expresses joy, happiness, cheerfulness, or excitement. It might also be used to show an ironic attempt at positivity when things are grim.

Where does 😄 Grinning Face With Smiling Eyes emoji come from? 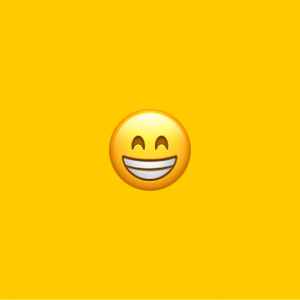 In September 2016, Apple released an update to iOS that changed the emoji’s look, making it much more clear that it depicted a happy face. Before then, on iOS this emoji looked very similar to the already existing grimacing face emoji. Other platforms like Facebook and Twitter had this same design issue. This caused the emoji to previously be perceived as a grimace or as something negative due to the design. Because of this, many users have come to think of this emoji as representing awkwardness, discomfort, or displeasure despite its positive name. 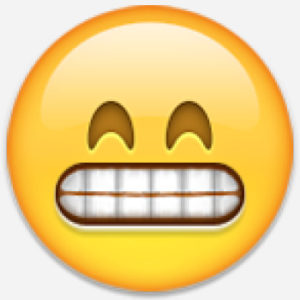 This cross-platform graphical difference resulted in ambiguity and some unintended meanings. A person might think they were sending out a happy face, but the recipient might receive a grimace instead. Grimaces are quite far from the feelings that someone who meant to send a grin might want to communicate. In fact, in a study done by Hannah Miller, a researcher at the GroupLens research lab at the University of Minnesota, a person receiving the grinning face with smiling eyes emoji on an Apple device generally perceived it as having a negative sentiment overall.

But, the grinning face with smiling eyes emoji is generally very positive in meaning. Today, this emoji is more graphically consistent across platforms than it was in the past, and so its meaning is no longer ambiguous or confused between devices. Since it’s been standardized, on all devices it now has a big grin that radiates genuine joy and happiness.

Making people smile is by far the best feeling
@ashlyn_inglis6, April, 2017
Everything is aching n I can't stop crying and to top it all off I've done fuck all revision
@kaz_bridson, April, 2017
Torn between watching The Walking Dead or the Oscars. I'll be switching a lot with the remote tonight!
@HotMamaKelly, February, 2017
SEE MORE EXAMPLES

This is the kind of emoji that’s used when a person wants to wish someone a nice day or they want to revel in some positive event happening in their life. This emoji is very often interpreted at face value and as something celebratory or happy.

This article makes me feel so much better!! I now understand I may not be alone!!!😁 https://t.co/ciRnaI8eUL

While it often appears in jovial settings, it may also appear when things aren’t so great. If things are going poorly in a person’s life, they might plop a grinning face with smiling eyes emoji at the end of their sentence as an ironic contrast to their previous statement. This emoji can act as a great symbolic juxtaposition.