What does 😅 Grinning Face With Sweat emoji mean?

Whew, that was a close call. The grinning face with sweat emoji is used to indicate the particular kind of relief experienced after narrowly avoiding disaster. Or back up a tick and use it to indicate nervousness during tense situations. This emoji can also let folks know you are hot n’ sweaty—from exercise, spicy food, or seeing a sexy babe.

Where does 😅 Grinning Face With Sweat emoji come from? 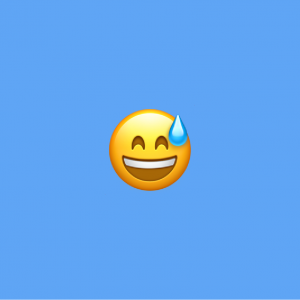 When this emoji was approved as part of Unicode in 2010, it was called Smiling Face With Open Mouth and Cold Sweat emoji because it was specifically intended to convey the nervous laughter used to diffuse tense situations. However, users employed the emoji in such a variety of ways counter to the original meaning that the name was eventually changed to grinning face with sweat emoji.

Archie andrews is sexy as Fred in this river dale episode. 🔥😅
@tonadrews, November 2018
soooo i just a nap and i woke up thinking it was tomorrow and that i missed the bus for our game tomorrow and everything. phew. 😅
@arb_2016, February 2017
15 pounds does seem like a lot until you lift weights 😅😅
@RosaaOchoa, November 2018
SEE MORE EXAMPLES

In 2016, City Pages claimed the grinning face with sweat was a  “rarely used emoji, as few people look this happy while sweating.” But the emoji’s popularity has led it to be used to portray a range of emotional and physical states.

A major use of the grinning face with sweat emoji is to celebrate squeaking through a close call:

But it can also be used to express chagrin or mild embarrassment–perfect for a belated birthday text or tweet.

Hope you had a great day

Taken quite literally, it can mean a person is sweating because they exercised…

A post shared by Elisabetta Fratocchi (@fratocchielisabetta) on Nov 9, 2018 at 8:09am PST

…or maybe they’re about to eat something piping hot.

Or perhaps someone is flushed from seeing a cutie. This emoji is often included in what are called “thirst tweets,” or tweets about how bangable someone is.

You will also see this emoji accompanying posts about anime because, according to Winnie Liu of the Factorialist, “the giant sweat drop above the brow has traditionally appeared in Japanese animation…to indicate awkwardness, frustration, embarrassment, and sentiments like What the heck?”