What does  Face Without Mouth emoji mean?

The face without mouth emoji can be used as an emotional-tone marker to indicate sadness, loneliness, disappointment, emptiness, and genuine self-deprecation. It can also be used more literally as speechlessness or to represent zipping one’s lips. In some uses, it’s a symbolic marker for sheepishness.

Where does 😶 Face Without Mouth emoji come from? 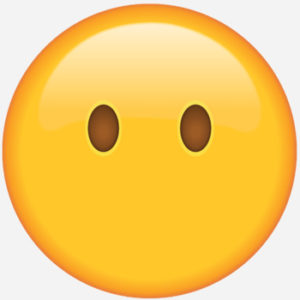 Examples of 😶 Face Without Mouth emoji

got no motivation for exams tbh
@helen_balfour, April, 2017
i like a boy for the first time in ages and i forgot what a shitty feeling it is :))))))) #
binches, Tumblr, March, 2016
Hey guys, Desperately need money here, I'm a homeless idiot and I need to know how I can advertise my art that I put on here, I have quite a number of art pieces I've done I'm just so lost here not sure what to do sorry if I'm being stupid.
Igna5sv, Etsy, January, 2017
SEE MORE EXAMPLES

Who uses 😶 Face Without Mouth emoji?

The face without mouth emoji can communicate a certain sense of despair. It often accompanies social media, blog, or forum posts written to indirectly reach out to others. Someone might make a post about shutting down and isolating themselves from others, and it might include the face without mouth emoji. Likewise, someone might text a friend about feeling lonely or unsure of their status with others, including this emoji.

It doesn’t all have to be bad though. Sometimes, this emoji is used in situations where someone feels like they can’t offer any comments on the situation at hand. Perhaps, they’re literally speechless and post the face without mouth emoji as a reaction to something, either positive or negative. Maybe their favorite musician liked one of their posts on social media. Or, maybe they feel like they’re gabbing too much about something they’re passionate about, so they use the face without mouth emoji to show that they’re putting a lid on it.

So sad either Jamie or Dakota can't say anything nowadays that will cause drama 😶 pic.twitter.com/ZSgV9AmzAD

This emoji also works well when someone feels sheepish. This includes situations where they might be asking for a big favor or for advice when they know they’ve gotten themselves into a bad spot. For example, if someone were kicked out of their apartment and needed to humbly ask their friend for a place to stay, they might tack on the face without mouth emoji at the end of their request as a way to indicate that they know they are asking for a big favor.