The meanings of the slightly frowning face emoji run from “this is sad but not that sad” to “this is a tragedy of global proportions.”

It can also signify that you think someone’s joke isn’t funny or that something might seem like a joke … but isn’t.

Where does 🙁 Slightly Frowning Face emoji come from? 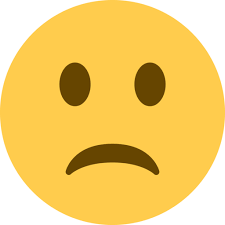 Not be confused with the disappointed face emoji (with down-turned eyes and a deep frown), the slightly frowning face has a gentler frown and neutral eyes.

Added to the Unicode Consortium in 2014, it is relatively consistent across platforms. However, on Facebook it has eyebrows, and Microsoft gave it their characteristic strong black border.

Im clearly stressed af breaking out like this 🙁
@ajah__lynn, September, 2018

@DebbiBach 2 of my friends lost their sons this week, car accident & illness. 2016 has been a terrible,tragic year. I'm sorry for ur loss. 🙁

@anicat, December, 2016
That was a moving interview with the mayor of Puerto Rico @AliVelshi ,you could see the truth and hurt in her eyes,needless deaths that could have been prevented,a black stain forever engraved into our history books forever 🙁
@SyedOusman, August, 2018
SEE MORE EXAMPLES

It accompanies posts about how something bad—but not that bad—happened … like when you ordered a soy vanilla latte and got a soy almond latte.

However, in the crowded emoji field these distinctions sometimes get lost and people have started using it for significant tragedy as a way to express sympathy for someone who has lost someone close to them.

RIP @carrieffisher 😞 such a tragic loss😞.. 2016 has took to many people 🙁 pic.twitter.com/oxpqlH4KYa

It is also used in posts about major news events to show how the person posting may feel about the current state or affairs or about tragedy on a global scale.

Thoughts and prayers for all that being affected by #HurricanFlorence I’m glued to the TV 🙏🙏🙁 how can we help?