😤 Face with Steam from Nose emoji

What does 😤 Face with Steam from Nose emoji mean?

This face with steam from nose emoji depicts an angry or highly annoyed face, eyes closed, brows scrunched up, and steam coming from the nostrils.

It’s used to express a variety of emotions, ranging from frustration to pumped-up passion about a particular topic.

Where does 😤 Face with Steam from Nose emoji come from? 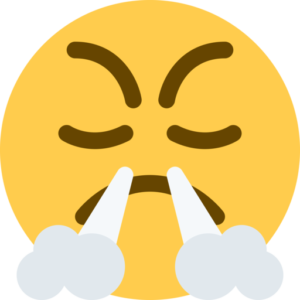 The face with steam from nose emoji was first approved as part of Unicode 6.0 in 2010 under the name Face With Look of Triumph and was intended to reflect a feeling of victory or pride. Hmmm.

That was later downgraded to “disdainful,” but clearly this emoji depicts emotions like anger, frustration, determination, and pride, more than disdain. Though, instead of steam coming out of the little guy’s head, which is generally how we express this kind of discontent (in the world of cartoons and illustrations anyway), it’s raging out of his nostrils, which is sort of weird.

Examples of 😤 Face with Steam from Nose emoji

obviously i should be your only one, i'll fight 😤
@seenelene, September, 2018
Jalapeños. All they do is totally overpower whatever you’re eating, and melt your face off in the process when you accidentally bite into the little bastard 😤
@Dsb85, September, 2018
I hate Monday’s with a passion 😤‼️
@Thekobeeeway, September, 2018
SEE MORE EXAMPLES

Who uses 😤 Face with Steam from Nose emoji?

That’s one way to let off a little steam, or you can use the face with steam from nose emoji too.

Although it’s occasionally used to express pride (as was its original intent), the face with steam from nose emoji is mostly used when people are feeling frustrated; angry; anxious; puffed up from ego or pride or maybe even hormones. Or, when people just feeling like they are CRUSHING IT.

Two Mavericks at the @MiamiOH_SB camp this past weekend. Working hard and getting better in the off season 🤘🏼😤 pic.twitter.com/0HEDBYkjxd

Come out and support your EMHS Volleyball team as they take on Santa Fe🤢🤢. There will be FREE pizza and T-shirt’s🍕🍕🍕. STUDENT SECTION THEME IS JERSEY😤😤😤 pic.twitter.com/781zVlfRLK

i'm so thankful that i'm not in the same place i was in last year. things have changed so much and i feel so blessed to have grown and am now able to continue to grow into the woman i wanna be. WE LIVE BABY 😤👌🏾💯🤪

Just a heads-up that literally no one can stop me 😤 pic.twitter.com/BaJzQr2f3p

And here we have the “crushing it” usage …

It’s also used when someone is coming after your man, and you are NOT. Having. It.

i know it’s 2:16 am but life with maK is coming for my man and i’m not here for it😤 #omgpage #dallaswinston #😤 #mattdillon but also why did she get disgusted after saying he’s 54 like it’s an age did u really think you were going to get him? LMAO 😛