What does 🙄 Face With Rolling Eyes emoji mean?

Face with rolling eyes is an emoji used to express disbelief, annoyance, impatience, boredom, and disdain. It can also be used to indicate sarcasm or irony.

Where does 🙄 Face With Rolling Eyes emoji come from? 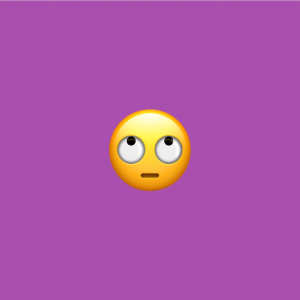 Face with rolling eyes goes by a lot of other names, including eye-roll, eye-rolling, roll eye, rolling eye(s), and rollover-eyes emoji

#AncientAliens Theorist: “Humans can’t move large blocks, it must have been aliens.” @MIT: “Actually our students built a 2,000 pound block that can moved with the flick of a finger.”

Face with rolling eyes hasn’t just been popular, though. Some think it can be quite useful in addressing the ambiguity that riddles electronic communication. As Ashley Fetters argued in April 2016 for GQ, face with rolling eyes can function as a much-needed sarcastic tone marker, indicating that a message should be read as ironic, thus eliminating any confusion.

That's the dogs actual name. Kate Middleton. FYI it's a shit poodle but I gave it a pat anyway and was told to address the animal by her full name, not just Kate.
@kraftworkdesign, March 29, 2017
Who [sic] do people have to ruin halloween for everyone with their racist/islamphobic costumes?
@reb0rnwolf, October 30, 2016
instead of studying Eleni chooses to spend her time baking a chocolate cake yet again

The shades of exasperation face with rolling eyes can convey are just as numerous as its names. Like the eye-rolling gesture it depicts, users primarily employ face with rolling eyes to show, with varying degrees of intensity, that they find someone or something irritating, uninteresting, unbelievable, undeserving, or unimpressive. The emoji can roughly translate as “You’ve got to be kidding me,” “You can’t be serious,” or “I don’t have time for this.” Face with rolling eyes can also carry the force of a resigned sigh or “duh.”

Face with rolling eyes enjoys wide use among a variety of users. However, it looks very different across different devices and operating systems. Depending what device you see it on, the emoji’s skyward-glancing eyes can look more thoughtful, anxious, or coy, and less contemptuous, which, for new users, could cause some miscommunication.