What does Eyes emoji 👀 mean?

The eyes emoji has many uses. It mostly serves to draw attention to something the user wants to highlight, especially in situations that involve drama and interpersonal tension.

It can also be an emoji representation of shifty eyes or the action of side-eyeing. This emoji sometimes appears when someone finds a person attractive.

Where does 👀 Eyes emoji come from? 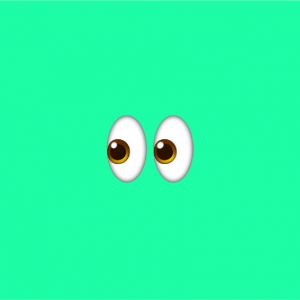 The eyes emoji is a pair of eyes looking slightly to the side in most renditions of the emoji. However, when Google released the eyes emoji, their version only featured one eye. The eyes emoji was added as part of Unicode 6.0 in 2010 and added to Emoji 1.0 in 2015.

When someone thinks a tweet is about them, I mean it wasn't but if the shoe fits
@satanskyler, April, 2017
Thomas Sanders is so amazing but his butt is incredible # , #thomas sanders
landus beyoncebeyoffce, Tumblr, July, 2015
NFL regular season schedules will be released next Thursday, stay tuned.
@LeadingNFL, April, 2017
SEE MORE EXAMPLES

The eyes emoji is great for situations that involve drama, especially when the person using it is very much enjoying that drama. For example, a Twitter user might upload a screenshot of a heated situation where strong words are exchanged and caption it with the eyes emoji. In this case, it’s almost like the emoji equivalent of munching on some popcorn while watching conflict unfold. People who use the eyes emoji in this way are thrilled to be bystanders and relish observing drama as it happens.

Ah, they grow up so fast! #PrincessCharlotte has already perfected the art of side eye at such a young age. 👀🤣 #RoyalWedding pic.twitter.com/w6KwkwdfRW

In more direct confrontations, the eyes emoji is good for drawing attention to concerning behavior, albeit in a somewhat judgmental way. In this same vein, it can be used to express disbelief or disapproval at a situation. If your friend says that they left their dog in a hot car during the summer, you might respond with “What?” followed by the eyes emoji. When used in situations where political figures or celebrities are concerned, the eyes emoji can be used to highlight a ridiculous comment or action.

Some social-media users might place the eyes emoji next to a link or statement they want to highlight or promote. In this context, the eyes emoji becomes shorthand for “Pay attention to this!” or “Look at this!” This usage stays very true to the fact that the emoji is a pair of eyes. On other posts, this can seem more prodding. For example, a blogger might post that they only need nine more followers to reach their next milestone, followed by the eyes emoji.

This emoji also can be said to express thirst, a slang term meaning “desire,” toward an attractive person. This emoji can also be used in conjunction with sexual questions that are of great interest to the asker. Some of these situations might be inappropriate, like asking intrusive sexual questions to a stranger. Because of this, the eyes emoji can sometimes be seen as pervy, but in a self-aware way.

This is not meant to be a formal definition of 👀 Eyes emoji like most terms we define on Dictionary.com, but is rather an informal word summary that hopefully touches upon the key aspects of the meaning and usage of 👀 Eyes emoji that will help our users expand their word mastery.