What does 👺 Goblin emoji mean?

The Goblin emoji 👺 depicts a tengu, or an arrogant character from Japanese folklore. It is portrayed as a red mask with menacing eyes and a frown. It has bushy black eyebrows and a mustache—and of course, the tengu’s signature long nose.

People in the West commonly use it to suggest trolling, evil, anger, mischief, and naughtiness—including the sexy kind.

Where does 👺 Goblin emoji come from? 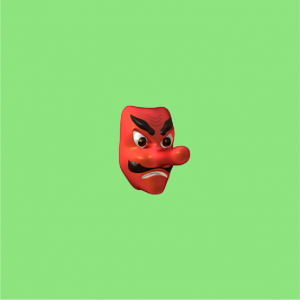 The tengu assumed emoji form as the Goblin emoji 👺 in 2010 under Unicode 6.0 and is officially called Japanese Goblin.

Westerners unfamiliar with the tengu, however, often call the emoji a goblin or troll.

Recorded in literature as early as 720 CE, tengu have deep roots in Japanese folklore, where they’re a type of minor Shinto god and yokai (a general monster, goblin, or demon). 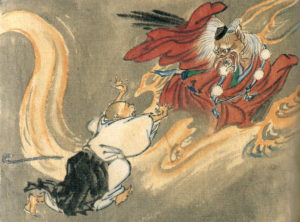 Tengu are a type of anthropomorphic bird-dog creature, literally meaning “sky-dog” in the Japanese kanji 天狗. The tengu is a boastful trickster distinguished by its long nose, prominently featured on masks for tengu characters in Japanese kabuki and Noh theater.

In January 2018, Unicode recommended against a distinct troll emoji due to similarities in form and use to the goblin and Ogre emoji 👹, which is based on another creature from Japanese folklore.

With a face only a mother could love...👺
@WilliamShatner, May 15, 2018
Promote what you LOVE ❤ instead of bashing what you HATE👺 Energy is a real thing whether it’s positive or negative.
@TeamRHJAZ, May 16, 2018
you got the face of an angel and the personality of

Among Japanese users, the Goblin emoji 👺 can call someone out as conceited or arrogant, in line with the tengu’s role in their culture. Those unfamiliar with the tengu, however, often use the emoji to call out internet trolling.

To all you Haters😡and Trolls👺out there-it's not gonna work: I'm loving my body🕺-owning my truth and ready to be the best me possible!😀🌈🌞🌻🦋💖😍

For others, the Goblin emoji 👺 looks like a devil, so it gets used to demonize something, both cruelly and humorously.

Andrew Pudzer on MSNBC is demonstrating his partisanship by blaming Dems for resistance to Pompeo as Secretary of State. Thank God he didn't become a part of Trump's Crooked Cabinet.He is an arrogant entitled JERK.👿👺👿👹👺👿👹

That mean, red face of the Goblin emoji 👺 also lends to expressions of strong feelings of hate, frustration, and anger…

When you're jacked you finally have cereal but there is no damn MILK! 😡👺#Angry

… or scary feelings, especially around Halloween and in conjunction with the Ogre emoji 👹 or devil-themed emoji.

This is not meant to be a formal definition of 👺 Goblin emoji like most terms we define on Dictionary.com, but is rather an informal word summary that hopefully touches upon the key aspects of the meaning and usage of 👺 Goblin emoji that will help our users expand their word mastery.