What does  Goat emoji mean?

When not alluding to the literal animal, the goat emoji stands for GOAT, an acronym meaning Greatest of All Time. It is generally used in reference to highly skilled individuals, such as award-winning musicians or talented athletes, in order to praise them as being the all-time best in their chosen field. For example, in 2022 quarterback Tom Brady was praised as a GOAT upon his retirement after 22 seasons with the NFL.

Where does 🐐 Goat emoji come from? 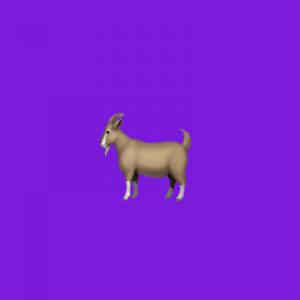 The goat emoji is used to signify that someone is highly talented, arguably even the Greatest of All Time. This label is often applied to athletes, and especially to hip-hop stars.

While the acronym GOAT seems to have first appeared in the 1990s, it was not until rapper LL Cool J released his album G.O.A.T. (Greatest of All Time) in 2000 that the term achieved widespread recognition. The album was a huge success, and cemented the now seemingly random connection between worldwide success and the goat emoji.

Upon his retirement in 2022, sports fans and media crowned quarterback Tom Brady the GOAT  for his accolades: Brady is a seven-time Super Bowl champion and has been named Super Bowl MVP five times, a feat unmatched by any other player. The title has been similarly used in sports to refer to Tiger Woods, Michael Jordan, and Simone Biles, for example. Not everyone is familiar with the term, however—in 2021, Meryl Streep humorously reported she thought Jonah Hill was comparing her to a farm animal when he called her the GOAT.

Old man in the white shorts is the GOAT
@WhistleSports, March 24, 2017 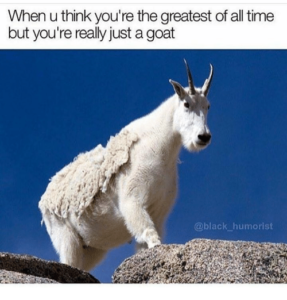 @black_humorist via onsizzle.com
Don't care how much people want Wenger to leave, ain't having him abused & shamed. Still the GOAT Arsenal manager. Have some respect.
@AFCAMDEN, March 20, 2017
SEE MORE EXAMPLES

The history of GOAT being used to describe athletes owes much of its popularity to Muhammad Ali. He famously used The Greatest of All Time in reference to himself in the 1960s, though only the spelled-out version. He would often shorten this to simply The Greatest.

Serena Williams' husband welcomed her back to tennis with four billboards saying she's the "Greatest Momma of All Time" 🎾👶🐐 https://t.co/wOe20WLBY0 pic.twitter.com/2GuiK3gtQN

As a result of the term and emoji’s popularity, it’s becoming increasingly common to see important figures and/or record-breaking celebrities referred to as GOATs as a compliment. On social media, the goat emoji is enough to get the statement across without spelling it out.

Sometimes GOAT isn’t even stylized as an acronym, which suggests that in certain circles, people are so familiar with this expression that it requires no explanation. This is the case with the 2004 book Goat: A Tribute to Muhammad Ali.

This is not meant to be a formal definition of 🐐 Goat emoji like most terms we define on Dictionary.com, but is rather an informal word summary that hopefully touches upon the key aspects of the meaning and usage of 🐐 Goat emoji that will help our users expand their word mastery.