What does 🌟 Glowing Star emoji mean?

The Glowing Star emoji 🌟 is used for anyone or anything that really shines or dazzles.

This can include anything praiseworthy, people who look radiant, celebrity superstars, good vibes, being in love, true north, starred reviews, and glittery or sparkly things—like actual stars.

Where does 🌟 Glowing Star emoji come from? 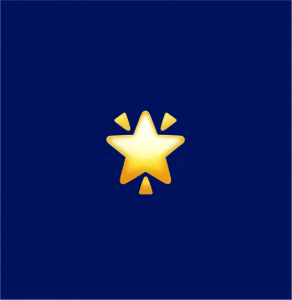 It depicts a five-point star illuminated with bursts of light. On most platforms, the star is yellowish-gold with similarly colored bursts, except for Microsoft’s, whose flares have a kind of “Little Star of Bethlehem” blue.

Since 2015, the Glowing Star emoji 🌟 has had special meaning on Snapchat, designating photos or videos that someone has viewed repeatedly, suggesting the content really stood out.

In texts and on social media, the Glowing Star emoji 🌟 radiates praise and positivity, such as the feeling of being blessed.

Lead me to the place where I can dream of happiness…

It also applauds a stellar performance or a dazzling superstar.

Go to the #MetGala dressed as the Pope, but make it fashion. @Rihanna really did that!!! 🌟 pic.twitter.com/nuprghMgsc

The Glowing Star emoji 🌟 can sparkle like so much glitter makeup.

Enter 2017 in style with @thegypsyshrine. Pop down to our Westfield Stratford store on NYE between 12-7pm to get made up 🌟🌟🌟 pic.twitter.com/92qwMICLk3

Perhaps riffing on expressions of seeing stars or feeling star-struck, the Glowing Star emoji 🌟 expresses feelings of affection toward a crush, loved one, celebrity, or sports team. It can even stand in for “true north,” a metaphor for a guiding force in someone’s life.

Gold stars have long been used to rate a performance or review a product. The Glowing Star emoji 🌟 takes a cue from this convention.

And, of course, the Glowing Star emoji 🌟 can represent actual little stars twinkle-twinkling in the sky or atop Christmas trees.

After hoco pajama day tmr "go back to bed" 🌙🌟☁️