What does 🎎 Japanese Dolls emoji mean?

Some emoji can seem utterly obscure or random, but they often have important meanings in Japan, where emoji originated. Like the Japanese dolls emoji, 🎎, which shows a male and female doll in traditional Japanese dress.

They are meant to represent the Emperor and Empress of Japan and used for the March 3rd celebration of Hinamatsuri, or Doll’s Day or Girl’s Day.

Where does 🎎 Japanese Dolls emoji come from? 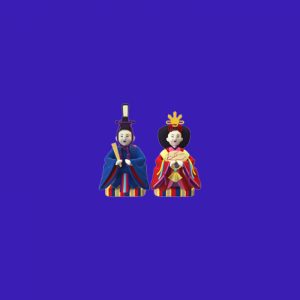 The Japanese dolls emoji depicts a seated male and a female figure in traditional Japanese costume dating from the Heian Period (794–1185). These dolls are a major feature of the Peach Festival (Momo no Sekku), which became the Japanese Dolls Festival or Girl’s Day (Hinamatsuri) and celebrated on March 3.

The male doll is known as obina and the female doll as mebina, and together they are meant to depict a royal wedding ceremony between an emperor and empress or prince and princess.

The tradition of displaying these dolls during the Peach Festival dates back to at least 1625, when imperial court ladies set up a place for the emperor’s daughter, Oki-ko, to play. It’s believed that initially the dolls were for playing with, but now they are mainly for display. Many girls in Japan receive a set of these often expensive dolls, some of which are passed down as heirlooms.

These Japanese dolls were approved under Unicode 6.0 in 2010. As shown in the screenshot from Emojipedia below, the Apple emoji for Japanese dolls is the most detailed. The male doll, seated on the left, is dressed in blue and the female doll emoji is dressed in red. Both dolls have traditional Imperial Japanese headdresses as well.

I want to see my friends doing good and glowing, nothing but prosperity for those surrounding me 🎎
@rociyoooo, July, 2018
#WhosWhoAtIndState
@MufromtheGO, July, 2018
how i’m coming is either gonna attract a strong mind or offend a weak one..🎎
@jolicamille_, September, 2018
SEE MORE EXAMPLES

Perhaps due to their unfamiliarity with the tradition it represents, users in the West don’t seem to have a rhyme or reason in their use of the Japanese dolls emoji. They sometimes include it in social-media posts to illustrate anything girly. It’s also a popular feature in Twitter handles apparently because it’s considered cute and different.

Saving is easy until I get hungry

Sometimes, the emoji is accidentally included in a long stream of random emojis—because who can resist adding a little more color to a tweet?

Occasionally, Western users will use it to punctuate their social-media posts and texts about anything Asian—whether Japanese or not. Don’t stereotype Asians by lumping them altogether …

Japanese users don’t limit their use of the Japanese dolls emoji to Hinamatsuri either, its intended and most direct application. They use it to illustrate moments of friendship amongst girls, a reference to the spirit of the holiday. It also pops up in random strings of emoji in the East, too. Ah, the plight of the less-commonly-used emoji.