What does desu mean?

Desu is a polite Japanese linking verb meaning “to be” as well other forms of the verb. Western fans of anime and manga sometimes add it to the end of sentences to sound cute and imitate Japanese.

Where does desu come from? 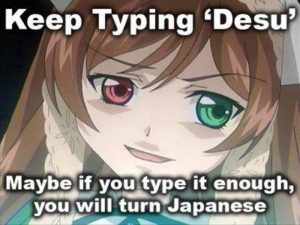 The origin of desu is a bit uncertain, though there are many theories. It may be a contraction of a polite way of concluding a sentence—possibly de so, de gozaimasu, or de arimasu, but no consensus has been reached. Use of desu dates back to the Muromachi period (1337–1573), where it was used in traditional theater for characters to introduce themselves. It became more commonly used in polite speech as forms of to be from the end of the Edo period (1603–1868) onward. By the Meiji period (1868–1912), use of desu was widespread. 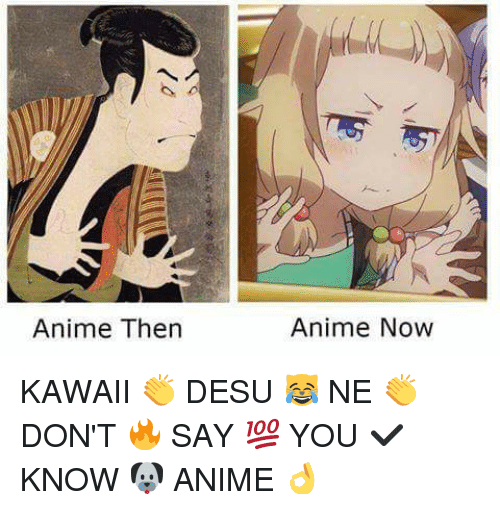 Desu became known to Western audiences via Japanese anime and manga, a form of Japanese cartoon animation and comics. During a wave of anime and manga in the West in the 1990s–2000s, English-speaking users in online fan forums began writing desu at the end of their sentences to mimic of Japanese speech (e.g., I love it desu). This was seen as being more kawaii, or Japanese for “cute” and the culture of cuteness.

For SHOWROOM live in august, please allow me to discuss with BOSS. BOSS need some time to rest after a hard 2 weeks of many projects desu. Thank you for the supports desu! #janchan
@MARC31626851, August, 2018
Depending on the intonation, the meaning of this version of “sō desu ne” can vary from “That is an interesting question . . . ” to “Well, I am certainly flummoxed . . . ” or possibly even “Excellent question, you cheeky fellow.”
Daniel Morales, The Japan Times, June, 2010 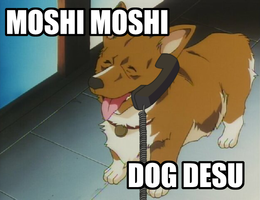 Desu is a polite way of saying to be in Japanese. Very often, desu appears at the end of a sentence (e.g., Kono inu wa kawaii desu  or “The dog is cute”). It also gets conjugated (deshita for the past tense) and suffixed to nouns in modifying contexts. The word is incredibly common in Japanese—small wonder given that it means “to be”. 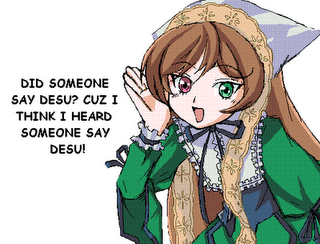 Desu is associated with casual politeness in Japanese language and culture, which is why Western users seeking to mimic the tone of their favorite manga and anime by putting desu at the end of their sentences (where it often grammatically falls in Japanese) like to use it to seem cute online.

The word desu became a meme in 2006 when a 4chan image board, /b/, was spammed in a retaliatory attack by members of the anime image board, /a/, with the word DESU over and over again. /b/ board members picked up on the word desu and used it to troll anime and manga fans (sometimes derogatorily called weeaboo) more generally . 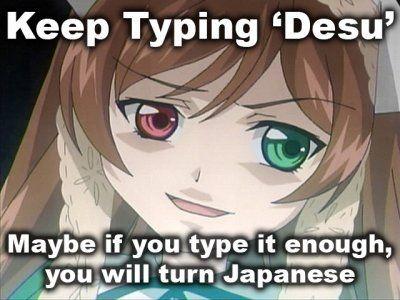 Many of the desu memes feature the character Suiseiseki from the anime series Rozen Maiden, who is known for her obsessive need to be polite and end every sentence with desu. She is recognizable for her striking eyes of two different colors and green dress.

Desu has also surfaced in other memes, such as the snowclone moshi moshi X desu, featuring image macros of people on the phone. Moshi moshi X desu is a common way of saying “Hello, this is [X person]” on the telephone in Japanese. The meme pokes fun at the overuse of such Japanese terms online.

This is not meant to be a formal definition of desu like most terms we define on Dictionary.com, but is rather an informal word summary that hopefully touches upon the key aspects of the meaning and usage of desu that will help our users expand their word mastery.