What does 🎓 Graduation Cap emoji mean?

The graduation cap emoji is an image of a square, black board affixed to a skull cap with a tassel attached at the center, hanging to one side. It’s typically worn by those graduating from high school or college.

The emoji, however, is used in social-media posts about graduation, teaching and school, and also about learning in general.

Where does 🎓 Graduation Cap emoji come from? 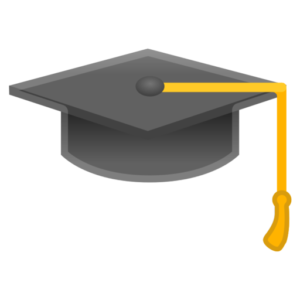 The classic graduation cap is also known as a “mortar board,” because of its resemblance to the usually flat pan a bricklayer uses for mortar … weird.

The cap is usually worn with an academic gown, resulting in the phrase, “cap and gown.” The style of the graduation cap is thought to go back to the biretta, a cap worn by Roman Catholic clergy, which evolved to be worn by noblemen and military leaders in the medieval and Renaissance and ages.

It was originally only worn by holders of master’s degrees, but eventually undergraduates and those earning bachelors’ degrees were allowed to wear it too. Now, you can find pint-sized graduate caps for young children.

So proud of my girl @AmyL019 is now offically a little student 😙🎓👓
@ColinFagan1, September, 2018
I just got my convocation (🎓!!) email and am suddenly super excited to wear the regalia because it makes me feel like a wizard. 🧙‍♂️🧙‍♀️
@MeganNBerry, September, 2018
I’m gunna take down third year, pregnant as hell and graduate with my little baby! 👶🏼🎓
@jesslouiseward, September, 2018
SEE MORE EXAMPLES

Thank you to all our new graduates and their guests for helping to make today's graduation ceremonies so special! 🎓🎓#PlymGrad pic.twitter.com/sUzf0KWWpA

For education posts both big and small, the emoji fits.

And, who says all graduation caps are the same?

Rare picture of a 'UniPOT' Graduate on convocation day 🎓 🎓 pic.twitter.com/EyguRR8VS3