What does 🦁 Lion emoji mean?

The Lion emoji 🦁 depicts the face of a lion. It is commonly used to represent real and fictional lions, things named after lions, the zodiac sign Leo in astrology (represented by the Leo emoji ♌), and traits associated with lions, such as royalty or pride.

Where does 🦁 Lion emoji come from? 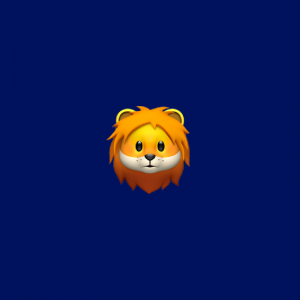 The Lion emoji 🦁 was approved under Unicode 8.0 in 2015 as Lion Face. On most major platforms, the emoji resembles a cartoon-like depiction of a male lion’s face looking straight at the viewer. Depending on the platform, the lion’s mane is either colored brown or orange. The WhatsApp version of the emoji features a lion with whiskers.

Lions are popular animals and can be found in many zoos and are frequently depicted in popular culture. For this reason, the Lion emoji 🦁 is commonly used to refer both to actual lions as well as fictional lions, such as in the popular animated film The Lion King (1994).

Because lions are popularly known as the “kings of the jungle,” the Lion emoji 🦁 is often used alongside the Crown emoji 👑 to refer to royalty or supremacy.

In astrology, the constellation Leo is commonly called “the Lion.” So, the Lion emoji 🦁 is frequently used by fans of astrology to refer to Leo or people whose sign is Leo. In this sense, it will be used with the Leo emoji ♌.

The Lion emoji 🦁 is used to refer to real and fictional lions.

Saw The Lion King on stage yesterday… LOVED it! What a great show 🦁

The Lion emoji 🦁 is also used to refer to things named after lions.

The Lion emoji 🦁 can also refer to the sign of Leo in astrology.

THE MONTH OF STRICTLY KINGS AND QUEENS HAS ARRIVED. 👑🦁 #leo

This is not meant to be a formal definition of 🦁 Lion emoji like most terms we define on Dictionary.com, but is rather an informal word summary that hopefully touches upon the key aspects of the meaning and usage of 🦁 Lion emoji that will help our users expand their word mastery.