The Libra emoji ♎ depicts the sign of Libra, a constellation and one of the 12 zodiac signs in astrology. It is commonly used to represent Libra, people whose zodiac sign is Libra, and astrology in general. According to astrology, people who were born between September 23 and October 22 have Libra as their sign. For this reason, you are more likely to see the Libra emoji ♎ used during this time as people celebrate their birthdays.

The Libra emoji ♎ usually depicts the glyph of Libra, which is thought to symbolize a setting sun. Libra is also often symbolized by a set of scales (Libra literally translates to “pair of scales” in Latin), so the Libra emoji ♎ is often used with the Scales emoji ⚖️.

As September rolls into October, count on a Libra to be diplomatic on whether pumpkin spice is the best of all. Here are some other words for fair Libras.

Where does ♎ Libra emoji come from? 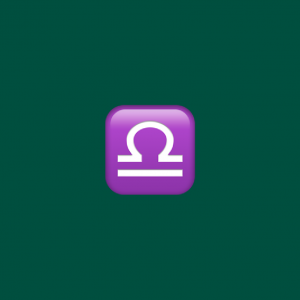 The Libra emoji ♎ was approved under Unicode 1.1 in 1993. On most major platforms, the emoji resembles the symbol of Libra (a glyph that resembles the letter omega over a straight line) in white and imposed on a geometric shape. On Apple, Samsung, WhatsApp, Twitter, and Facebook, the Libra symbol is on a purple square with rounded corners. On Microsoft, the purple square has sharp corners and is surrounded by a black outline. On Google, the Libra symbol is instead on a green circle.

On Twitter, many people put the emoji representing their star sign next to their usernames in order to identify themselves. As is the case with all of the other zodiac signs, this is also true for the Libra emoji ♎.

When the Libra emoji ♎ is used, it is often accompanied by the word Libra itself. It’s possible this is done to help identify what the symbol means, as it may not be familiar even to fans of astrology. Libra is commonly known as The Scales, and so the Libra emoji ♎ is frequently used alongside the Scales emoji ⚖️.

Libra friends want to see you win! Them other friends just want to be seen. ♎
@MyMylovelee, February 7, 2021
Yixing is just so libra too 🤭 Says he cant do it and just a second says he can. Libra and their indecisiveness ♎
@akaiito1125, September 13, 2021

I hate being a Libra sometimes but mostly I love it 🥰

If you have no intentions on being 100% real, don't even waste a #Libra's time. #TrueLibraFacts ♎

This is not meant to be a formal definition of ♎ Libra emoji like most terms we define on Dictionary.com, but is rather an informal word summary that hopefully touches upon the key aspects of the meaning and usage of ♎ Libra emoji that will help our users expand their word mastery.