What does 💌 Love Letter emoji mean?

The love letter emoji is one of many that use a traditional heart to convey the idea of love. On all platforms, the emoji is depicted with a simple envelope line drawing, the flap sealed with a pink or red heart sticker.

It’s used in all kinds of posts and messages about love and affection.

Where does 💌 Love Letter emoji come from? 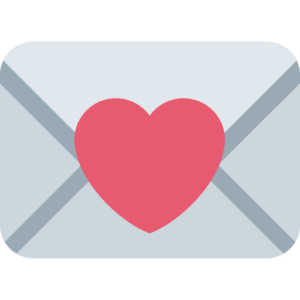 Is there anything more romantic than a declaration of love in written form? Sadly, love letters have fallen out of favor ….

Critics of texting and social media claim that even the act of writing a friendly letter has become a thing of the past, and that people are not learning to express themselves the way they used to.

Yes, you could write a love letter to someone by email, but chances are good it won’t have the same impact as a handwritten one, lovingly folded and put into an envelope, addressed by the besotted‘s writer’s hand. Finding a real love letter in one’s mailbox is a thing to be savored and remembered. Or … so we’ve heard. Nobody’s writing the dictionary these days.

Who wrote the first love letter, you ask? Chances are good the first declaration of love took its form in a gift of a dead animal or perhaps a cave drawing. That’s more romantic than email, too, we guess.

You just can’t put rules on this kind of thing.

i'm dropping all my uwus for han jisung:

In these two posts, the emoji is used to express a love of letter-writing, which is a super “meta” use of the emoji.

Rainy days for writing letters 💌 Today in my stories you can see some inspirational accounts. Sometimes I share people who makes beautiful things. I wished we all do this sometimes to help each other to find more feedback in Instagram and to see that people really like what we do 😌 . #stationery #stationeryaddict #template #sendmoremail #goodies #penpals #snailmail #sg_letter #letters_with_art #letters #happymail #warmlettersfromyou #snailmailrevival #snailmailrevolution #writemoreletters #бумажныеписьма #письмо #почта #пишитеписьма #💌 #mailart #stamps #postal #mail #envelope