The Military Medal emoji 🎖️ depicts a medal and ribbon that resembles a fictional military decoration. It is commonly used to represent the military, soldiers, veterans, acts of heroism, and holidays that honor soldiers or veterans. Specifically, the Military Medal emoji 🎖️ sees increased usage on Veterans Day (November 11), Memorial Day (the last Monday in May), and Armed Services Day (the third Saturday in May).

The Military Medal emoji 🎖️ is also used more generally to refer to any kind of award or achievement.

Where does 🎖️ Military Medal emoji come from? 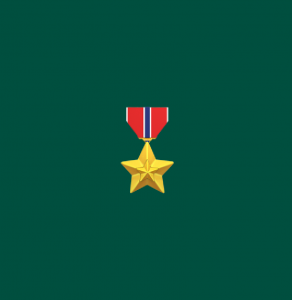 The Military Medal emoji 🎖️ was approved under Unicode 7.0 in 2014. On most major platforms, the emoji depicts a gold medal attached to a ribbon. The emoji doesn’t depict any real military honor, but slightly resembles actual decorations such as the Medal of Honor or the Silver Star.

On most major platforms, the ribbon is colored different shades of red, white, and blue with the specific arrangement and pattern varying by platform. The Facebook and Apple versions of the emoji depict a star-shaped medal. On all other major platforms, the medal is circular. On Google, WhatsApp, and Twitter, the medal has a star in the center.

The Military Medal emoji 🎖️ depicts a fictionalized military medal similar to those given to soldiers in real life and in popular culture depictions of the military. Because of this, the Military Medal emoji 🎖️ is often used to refer to real and fictional members of the military, acts of valor, or honorable achievements performed in the line of duty. Relatedly, the emoji is also used to honor and give gratitude to military veterans.

Happy Veterans Day to all home and abroad 🇺🇸 🪖 🎖️
@N_8_B, November 11, 2020
Good luck to everyone running the London Marathon today. Trust in your training and enjoy the atmosphere. Your medal is waiting for you! 🎖️🏃‍♀️🏃
@amy_everett_, April 28. 2019

The Military Medal emoji 🎖️ is often used to refer to the military, acts of valor, or holidays that honor current and former members of the military.

I want to thank everyone past or present that has served in our military. I have many family members that served and know that it can often be a sacrifice. Today we honor that service to all the brave people who defend our great country. Thank you! 🇺🇲🎖️ #VeteransDay

Happy Memorial Day to all Vets.
Thank you for serving our country.🎖️

The Military Medal emoji 🎖️ is also used more generally to refer to awards or achievements.

The things that you need to be a CHAMPION 🎖️🏆

Virat Kohli has completed 22,000 runs in international cricket. He becomes only the 8th batsman in history to achieve this milestone.