What does  Pile of Poo emoji mean?

The pile of poo emoji is used in a variety of contexts. A common usage is replacing the expletive shit (or crap), in both the literal and figurative senses. It can also be used to express passive aggression.

The poo emoji has become one of the most popular emoji that it’s even warranted its own merchandise—because who doesn’t want to sleep on a fluffy pile of poo?

Where does 💩 Pile of Poo emoji come from? 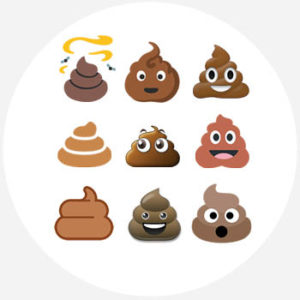 The pile of poo emoji is also called the poop emoji, dog dirt, or smiling poo. On more rare occasions, it’s interpreted as a chocolate ice cream or chocolate chip emoji by people who are either clued into the fact that the swirl of the pile of poo emoji is the exact same as the swirl of the ice cream emoji, or by people who simply don’t realize that this emoji has the word poo in its official Unicode name. Pile of poo was included as part of Unicode 6.0 in 2010 and added to Emoji 1.0 in 2015.

The pile of poo emoji was very popular in Japan before it became international. Its original connotation was whimsical, rather than insulting or vulgar, and it referenced a child’s television program. As Takeshi Kishimoto, a Google product manager who worked on the original implementation explained to Fast Company, “It says ‘I don’t like that,’ but softly.”

Some low-cost Android phones shipped with malware built in https://t.co/gKwVZYNHIm

In 2008, before it’s official Unicode release, Google’s designers crafted a poop emoji that was faceless and had animated flies buzzing around it. Gmail originally fought the inclusion of this emoji citing its vulgar nature, but they were ultimately convinced to include it by emoji’s creators. Google added in the smiling face in 2014 (it had become an industry-wide standard by this point). There is now debate about whether to include a frowning poo emoji.

Examples of 💩 Pile of Poo emoji

You are a manupulative, self-centered, destructive, poisonous human. Your true colours have most definitely shone through.
@Jodiii_Wills, March, 2017
Yeah y'all got y'all own crib but it's a piece of shit
@rayraybeen100, March, 2017
Can't a soul tell me at this point in my life.
@tianamone__, March, 2017
SEE MORE EXAMPLES

Who uses 💩 Pile of Poo emoji?

The poo emoji has many uses. It can replace the expletive shit in both literal and metaphorical senses. Because of the proliferation of the pile of poo emoji as a substitute for swearing, it has even garnered conversation on the appropriateness of the emoji and if it’s considered NSFW.

Still others use the pile of poo emoji not as a visual variant of shit but as an indication as to how the tone of a statement should be interpreted. This emotional modifier usually indicates a certain amount of anger, but also passive aggressiveness and annoyance, thanks to the cheerful, smiling face of this particular pile of poo.

I just ate a load of Dreamies which were for the cats. The Assistant says I might be ill. 🤢🤮💩💩 Do you think I will be? pic.twitter.com/t3e2Y8PgCC

That said, the pile of poo emoji does not always carry a negative or passive aggressive tone. On Tumblr, the pile of poo emoji is popular as a hashtag on selfies. One user referred to their selfie as looking like a “polished turd,” indicating a combination of self-mockery and pride in their appearance, and they found this particular emoji satisfactorily expressed that sentiment.