What does 🔫 Pistol emoji mean?

This is a loaded emoji.

The pistol emoji on most platforms now depicts a toy or water gun, though for a while at least half of the designs depicted a more realistic-looking weapon.

Where the use of this emoji at one time might have more serious intent or connotations, now it’s mostly used in more playful ways, though it can also pertain to gun culture (pro and con).

Where does 🔫 Pistol emoji come from? 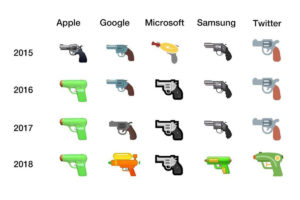 Original versions appeared on various platforms as a strong representation of a firearm or weapon. In 2016, Apple swapped out their version to a bright green plastic-looking toy gun, and other platforms soon followed suit. Google and Microsoft even added a round water chamber on top of their colorful image, making it appear very much like a water gun.

There are a few platforms, like LG and Mozilla, that still show realistic gun images, but those are being phased out.

WATCH: It Matters Which Way Your Gun Emoji Faces

Looking so forward to go back to work tomorrow 🙃🔫
@camie637, October 2018
Her abs is killing me right now 😮🔫
@SailorYeonwoo_, October 2018
Fortnite's getting a NEW gun! 🔫
@OMGitsAliA, October 2018
SEE MORE EXAMPLES

Since it’s the only gun emoji out there, the pistol emoji does double duty. It can be used in a lighthearted, whimsical way (toys, toy gun sounds, “kill me now,” or “killer good looks” implications, etc.) or it can be used in reference to real firearms.

Here, it’s used in what appears to be a lighthearted post depicting a love of gun culture.

Gun aficionados—both in the film biz and real life—use it:

Here, it’s used with a “if looks could kill” message:

if only looks could kill🔫 pic.twitter.com/5tuOJyCtUS

The intent may be the same here, but … well, who can tell for sure?

But, go wild! Some folks have no trouble pairing it with a Charlie Chaplin reference and rainbows.

A post shared by Michelle Vinther Rickelt (@michellevintherrickelt) on Oct 16, 2018 at 6:55am PDT

This is not meant to be a formal definition of 🔫 Pistol emoji like most terms we define on Dictionary.com, but is rather an informal word summary that hopefully touches upon the key aspects of the meaning and usage of 🔫 Pistol emoji that will help our users expand their word mastery.