What does🤳 Selfie emoji mean?

The Selfie emoji 🤳 shows an extended arm with a smart phone gripped by the hand, which is available in a range of skin tones. It’s implied that the phone and the camera are aimed at the holder, ready to take a selfie.

The Selfie emoji 🤳 is variously used to discuss selfies or when posting a selfie. It is also used on National Selfie Day, which is celebrated this year on June 21. As you can imagine, this emoji can be used any time someone is taking a selfie is … so it gets a lot of use!

Where does 🤳 Selfie emoji come from? 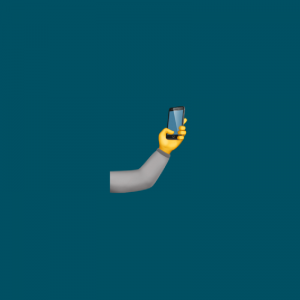 The first ever selfie—in the general sense of a photograph of one’s self—is credited to photographic pioneer Robert Cornelius in 1839, when he set up the camera and had time to pose in front of it, place the lens cap back on, and produce a daguerreotype of himself.

The word selfie is first reported in an online forum back in 2002, coined by an Australian referring to a messy self portrait. When the Sony Ericsson Z1010 mobile phone was released in 2003, it introduced the first front-facing camera, which quickly became a popular feature on cell phones.  The term selfie began climbing in popularity in 2010 and 2011, and in 2012, Time magazine called it one of the year’s Top Ten “buzzwords.”

I have a lot of cat things to do today but first, let me take a selfie.🤳😺
@Lyndsey_Pixie, December 12, 2018
Cristiano Ronaldo shows his class by blocking the security and patiently waiting for his nervous fans phone to work for the selfie 🤳 #GOAT #UEFA
@Nigel__DSouza, June 18, 2021

Selfies are very popular on social media—and so is the Selfie emoji 🤳 is too, particularly when it comes to posts discussing selfies, making fun of selfie culture, or even mirroring selfies (not to get too meta).

This is not meant to be a formal definition of 🤳 Selfie emoji like most terms we define on Dictionary.com, but is rather an informal word summary that hopefully touches upon the key aspects of the meaning and usage of 🤳 Selfie emoji that will help our users expand their word mastery.