What does 🤫 Shushing Face emoji mean?

Shhhhhh. The shushing face emoji depicts a round face, with a finger being held to its lips. You can almost hear the shhhh-ing sound coming from your phone. That’s annoying. Or helpful. Of course, it depends, as always, on context.

Sometimes, it means “quiet,” sometimes “don’t tell anyone I just wrote that,” and sometimes people seem to confuse it for the thinking face emoji.

Where does 🤫 Shushing Face emoji come from? 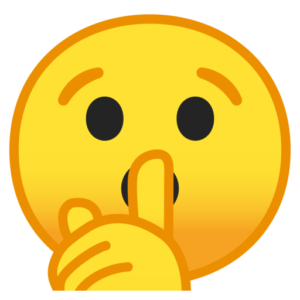 The shushing face emoji took some time to make its debut, which seems kind of surprising. It was approved as part of Unicode 10.0 in 2017 under the name “Face With Finger Covering Closed Lips” and added to Emoji 5.0 in 2017.

Some forecast it being widely used to tell people to shush, but that doesn’t seem to be the case, at least on social media. (If you’ve been texted this emoji more than once or twice, well, maybe you should be doing some 🤔.) (Oops, did we say that out loud?! 🤫 )

As stated above, sometimes it can “be quiet,” but it actually usually implies secrecy, like “don’t tell anyone I just wrote that.”

Liberty had a pretty busy weekend! Great things in the works 😉🤫
@LibertySZN, October, 2018
Wow, I’m in real disbelief right now 🤫
@BratzDollke, October, 2018
My squad about to kill 🔥 It is going to be a GREAT year! Don’t believe me just watch 🤫 #OwnYours
@EBrownFIU, October, 2018
SEE MORE EXAMPLES

The shushing face emoji is used to convey a sense of secrecy and is occasionally used to express a desire for quiet or in a post that is sleep related. On social media, it’s more about sharing a secret, or a secret thought. And in personal texting, it might imply, “let it rest.”

Tonight the construction of the cardboard bomber is complete. It is a total co-incidence that my partner is away this evening and I’m sure will be super impressed at the change in decor to our lounge 😬🤫. If this is my last tweet you will know why 😂 #B787 pic.twitter.com/G84hOysIQV

It’s often seen in sports postings on Twitter, as if pointing to a “secret weapon.”

Here we have the “sneak peek” idea, but how sneaky is it if you put it on social media?

Oddly, it’s also used in a completely opposite way—on posts that are all about promotion and that might be loud and boisterous.

Of course, social-media posts about silence are the best place for this emoji.

“All I insist on, and nothing else, is that you should show the whole world that you are not afraid. Be silent, if you choose; but when necessary, speak – and speak in such a way that people will remember it.” __Wolfgang Amadeus Mozart. Thank you @fundacionpabloatchugarry for being kind enough to participate in my #silenceproject This exhibition opens on November 1st at La Fototeca de Cuba in Havana. #mayoralphotography #🤫 #silenceproject #blackandwhite #womeninart #artinstallation