What does 🦨 Skunk emoji mean?

Better hold your nose: skunk emoji is coming through.

Where does 🦨 Skunk emoji come from?

Unless you’re dying to take a bath in tomato juice, you really don’t want to tick off this emoji. Behold the skunk emoji, 🦨.

Skunks are native to North and South America. The name skunk comes from an Americanization of Algonquian roots meaning “to urinate” and “fox” … yup, that’s right. Skunks, of course, are known for the stinky liquid they spray when they feel threatened by a predator.

While we are familiar with skunks as black and white in color, they can also come in browns, creams, and gingers. The skunk emoji 🦨, however, is depicted in current versions as a black critter with a white stripe and curved tail.

In 2019, the skunk emoji was approved under Unicode 12.0. On unsupported platforms, the emoji displays as an empty box. 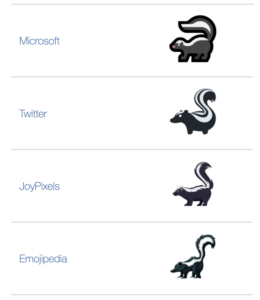 another firmware update and still no skunk emoji. Incredibly disappointing
@Stinking_Skunk, June 2019
When you skunk your neighbor at #cribbage... 👿 @jesch30 (Also why is there no skunk emoji?? Hello apple?) @ Portland, Maine
@BlakeHayes, June, 2019
Looks like cotton candy, smells like 🦨
@DogWithSog, May 2019
SEE MORE EXAMPLES

As of 2019, the skunk emoji is young, so evidence for its specific applications is still emerging.

Of course, people will take to the skunk emoji for the love of the much-maligned animal (Pepé le Pew would approve) …

… as well as for various literally and figuratively “stinky” matters.

🦝🦡🐀🐿🦔 but no skunk emoji. Really?!
Look at this cute face, come on. I need a skunk emoji! #Flower #Apple #IPhone #Emoji #Skunk pic.twitter.com/voR8LXBwcC

This is not meant to be a formal definition of 🦨 Skunk emoji like most terms we define on Dictionary.com, but is rather an informal word summary that hopefully touches upon the key aspects of the meaning and usage of 🦨 Skunk emoji that will help our users expand their word mastery.