The Star and Crescent emoji ☪️ portrays a star and crescent moon symbol, which is often used as a symbol of the religion of Islam. It is commonly used to represent Islam, Muslims, and Islamic countries.

Where does ☪️ Star and Crescent emoji come from? 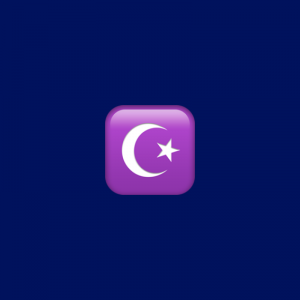 The star and crescent moon is often seen as a symbol—although unofficial—of the religion of Islam. This symbol appears on the flags of many Muslim countries and is often used to refer to Islam in popular culture. For this reason, the Star and Crescent emoji ☪️ is often used to refer to Islam and Muslims. In this sense, it is used similarly to other emoji that depict religious symbols such as the Latin Cross emoji ✝️ representing Christianity, the Star of David emoji ✡️ representing Judaism, and the Wheel of Dharma emoji ☸️ representing Buddhism and other Indian religions.

EID MUBARAK!!! To our Muslim brothers and sisters around the world, hope u had a peaceful month of Ramadan 🙏☪️ sending love!
@Krewella, June 4, 2019
To all my Muslim neighbors, I wish you a peaceful, healing, and transformative Ramadan. I hope this holy month allows us to embody our faith through acts of service for those in need. Ramadan Kareem ☪️
@RashidaTlaib, April 12, 2021

The Star and Crescent emoji ☪️ is used generally to refer to Muslims and Islam.

Eid-al-Fitr Mubarak ☪️ Pray at Home and avoid mass gathering. May this Eid bring joy and happiness in everyone's life.#EidMubarak

Ramadan Kareem to those that celebrate! ☪️ 💜

Scientists who are Muslim ☪️ represent many countries and cultures, we all do great science too! Who are some you know?