What does 🕋 Kaaba emoji mean?

The Kaaba emoji 🕋 displays the Kaaba, a black, cube-shaped building located in the city of Mecca, Saudi Arabia. The Kaaba is the most sacred pilgrimage site by followers of Islam. As a result, the Kaaba emoji 🕋 is often used to refer to Islam, Muslims, and a pilgrimage to Mecca, in addition to referring to the Kaaba itself.

Take a closer look at the colorful collection of emoji representing some of the “pillars” of Islam.

Where does 🕋 Kaaba emoji come from? 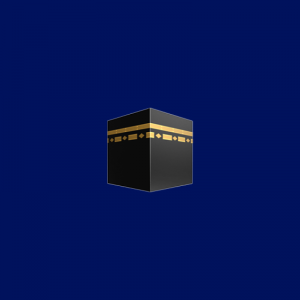 The Kaaba emoji 🕋 was approved under Unicode 8.0 in 2015. On all major platforms, the emoji depicts the Kaaba, which resembles a black cube-shaped building with a gold band and shapes near the top. On all major platforms, the emoji is illustrated so it is viewed from the corner and appears to have a three -dimensional shape. The WhatsApp version depicts a gray base and the Facebook version illustrates the bottom of the Kaaba colored gold.

For Muslims, the Kaaba is the most holy site on Earth, and they will turn to it when offering prayers to God. In Islamic tradition, the Kaaba is the House of God and was built by the prophet Abraham (called Ibrahim in Islamic scripture). It’s said that one of the stones in the Kaaba, known as the Black Stone, was given to Ibrahim by the angel Gabriel.

The Kaaba emoji 🕋 is used to refer to the Kaaba and the pilgrimage to Mecca.

My biggest dream in this life is to visit the Kaaba 🕋❤️

The first glimpse of seeing the Kaaba 🕋 is one that words simply cannot express the feeling.

More generally, the Kaaba emoji 🕋 is used to refer to Muslims and Islam.

Eid Mubarak to all my brothers and sisters in Islam. Have a blessed day. #EidalAdha2017 🕋

This is not meant to be a formal definition of 🕋 Kaaba emoji like most terms we define on Dictionary.com, but is rather an informal word summary that hopefully touches upon the key aspects of the meaning and usage of 🕋 Kaaba emoji that will help our users expand their word mastery.