What does 🧕 Person With Headscarf emoji mean?

Where does 🧕 Person With Headscarf emoji come from? 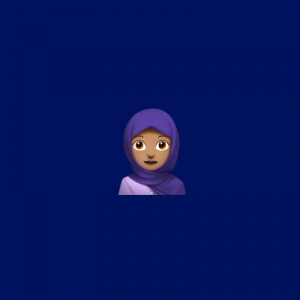 There have been calls on social media for a hijab emoji since at least 2012, and suggestions to the Unicode Consortium for hijab emoji and emoji modifiers at least as far back as 2014.

The push to finally make the emoji a reality, however, was led by a young Muslim woman who wanted to see herself and the hijab-wearing women in her life represented in emoji. In September 2016, a 15-year-old girl named Rayouf Alhumedhi partnered with graphic designer Aphelandra Messer, community organizer Ayisha Irfan, Unicode Emoji Subcommittee member Jennifer 8. Lee, and Reddit co-founder Alexis Ohanian to submit a detailed proposal for a hijab emoji to Unicode. This was bolstered by the launch of a website centered around the cause, an online petition, and a lot of press coverage, both in the US and abroad.

In November 2017, Rayouf Alhumedhi was named one of Time’s most influential teenagers in the world for her leadership in the creation of the Person with Headscarf emoji 🧕.

WATCH: Who Created The Hijab Emoji?

Examples of 🧕 Person With Headscarf emoji

After wearing hijab I realize it's not that difficult, all Muslim girls can carry it easily 🧕
@Asbarehman, January 29, 2021
Next time you see a women with a hijab 🧕 on.... tell her you think it’s pretty. It makes them feel accepted and loved!
@LoveDegoyette, November 22, 2019

Who uses 🧕 Person With Headscarf emoji?

Today, the Person with Headscarf emoji 🧕 is mainly used by the Muslim community on social media to proudly represent themselves in a more accurate way. It most often shows up attached to pictures of hijabs, celebrations of achievements by Muslim women, or just generally with women who wear the hijab (hijabi). Because Islam is a global religion, the emoji is used by millions around the world.