What does the 🍷 Wine emoji mean?

The Wine emoji 🍷 displays a glass of wine. It is commonly used to represent actual and metaphorical wine, alcoholic drinks, romance, fine dining, fancy restaurants, and wealth. It is often used alongside other emoji that depict alcoholic beverages, such as the Cocktail Glass emoji 🍸 and the Beer Mug emoji 🍺. The emoji is also used on May 25, National Wine Day.

Distinguish yourself among your wine-loving peers with these indispensable terms about wine that we’ve bottled up for you here.

Where does 🍷 Wine emoji come from? 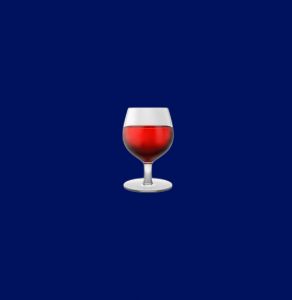 The Wine emoji 🍷, also popularly called Wine Glass emoji, was approved under Unicode 6.0 in 2010 under the name Wine Glass. On most major platforms, the emoji depicts a wine glass filled with a red wine (there is no white option). Depending on the platform, the wine glass may be depicted realistically or be stylized.

The Wine emoji 🍷 is commonly used to refer to actual wine and is used when speaking metaphorically about wine, as in the phrases “wine and dine” and “age like a fine wine.”

Because wine is often stereotypically thought of as a drink for the wealthy or elite, the Wine emoji 🍷 is often used to refer to glamorous or luxurious things, such as fancy restaurants or expensive homes. In a related sense, the Wine emoji 🍷 is used to talk about romantic dinners or dates. This is a reference to candlelight dinners (where wine is usually served).

The Wine emoji 🍷is used to refer to actual and metaphorical mentions of wine.

The Wine emoji 🍷is also used to refer to luxurious things and a wealthy lifestyle.

Lean cuisine and some hot cheetos… living that high life. 🍷🍛

I want to dress up really fancy and go out to dinner. I want to do ritzy things! 🍸🍷🍴

More generally, the Wine emoji 🍷is used to refer to alcoholic drinks.

I think we all need a drink after the year we just had….🍷

This is not meant to be a formal definition of 🍷 Wine emoji like most terms we define on Dictionary.com, but is rather an informal word summary that hopefully touches upon the key aspects of the meaning and usage of 🍷 Wine emoji that will help our users expand their word mastery.