The woman, curly haired emoji is technically two emoji sequenced into one. It was approved in 2018 under Unicode’s Emoji 11.0 set by combining the woman emoji 👩 and the curly hair emoji component.

At the time of this writing, the only platform to roll out the new emoji is Twitter, whose woman boasts blonde curls. Emojipedia’s in-house character features brunette hair. The default color of the woman is yellow, but skin-tone modifiers are available. 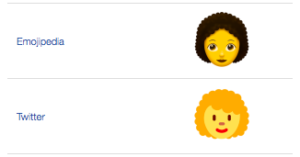 On devices that don’t support it yet, the emoji will display as the woman emoji and an empty box for the curly hair component. Which is basically every device … right now.

Going out on a Saturday night?! 🎉 Get your weave on… 👩‍🦱 💄 💃https://t.co/mSHspzLwfn#AliExpress #Weave #SaturdayNight #Hair pic.twitter.com/1OlK0OWTGo

Since those curls are atop a woman’s head, the emoji is used alongside other woman-based emoji (e.g., woman, red haired 👩‍🦰) to represent women from all walks of life—the sisterhood!

For some, the curls give off a youthful look. so the woman, curly haired emoji sometimes is used to signify a young girl.

Amazing young people who look after and care for a poorly parent..These carers have to be helped and supported both mentally and physically in the brilliant job they are doing.😍👩‍🦱👨‍🦱 #CarersWeek https://t.co/tUfV88P669