What does Santorum mean?

Santorum is the last name of former US Senator Rick Santorum.

Where does Santorum come from? 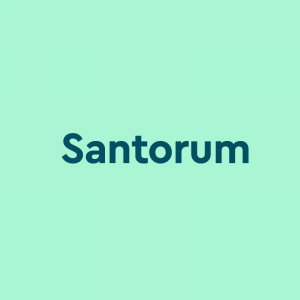 Rick Santorum served as a Republican senator from Pennsylvania from 1995 to 2007. In 2000, Santorum became chairman of the Senate Republican Conference (SRC), which made him the third-highest ranking Senate Republican as well as one of the youngest senators in a leadership position.

This position brought him to higher prominence in national politics—and directed more attention toward his public statements, including his controversial 2003 comments on gayness, as we’ll shortly address. Santorum later campaigned for the Republican presidential nomination in 2012, losing out to Mitt Romney; he also briefly ran a presidential bid in 2016.

Since 2003, the invented slang santorum has spread among the LGBTQ community and their allies, usually in online and video posts on social media. Savage also created a website (last active in 2015) that advertised the slang definition of santorum and kept caustic track of Santorum’s political career.

The slang santorum gained further notoriety when it was reported in 2010 that the real Santorum was encountering “Google problems,” as searches for his name would turn up the vulgar slang definition before information about him. Offering Santorum a chance to reclaim his public and political image, Savage offered in 2010 to take his website down if Santorum would donate $5 million to Freedom to Marry, an advocacy group supporting the legal recognition of same-sex marriages. Santorum declined.

Santorum encountered further difficulties in 2011 when his bid for the Republican presidential candidacy was met with a huge increase in use of his name’s slang meaning by media figures, such as Stephen Colbert and Jon Stewart, and leftist activists. It briefly happened again in 2015 when Santorum announced another, though short-lived, presidential campaign.

@neilhimself, February 29, 2012
Former GOP presidential candidate Rick Santorum called out President Donald Trump for nominating Judge Brett Kavanaugh to the Supreme Court ... “I think that Donald Trump said he was going to energize the base with this pick. I don’t think he did that,” Santorum told CNN’s Chris Cuomo.
Ed Mazza, HuffPost, July 10, 2018
SEE MORE EXAMPLES

Rick Santorum continues to be an active public and political figure and commentator, and his name is well known in news media.

Two of my most satisfying votes while living in PA were voting against Rick Santorum. https://t.co/oChy3Mn6aE

However, the slang version of santorum is also widely recognized, particularly as one of the first results on a Google search of the former senator’s name.

The slang is used both as a direct gibe at Santorum and in unrelated depictions of gay sex. However, given its history, it is more likely to appear in contexts challenging Santorum and those who share his homophobic views by making them feel uncomfortable about (perfectly normal) gay sex.

Dan, of all the great things you've done in your life, defining "Santorum" may rank as the greatest. #Santorum, the frothiest b.s.-artist of all time…

This is not meant to be a formal definition of Santorum like most terms we define on Dictionary.com, but is rather an informal word summary that hopefully touches upon the key aspects of the meaning and usage of Santorum that will help our users expand their word mastery.