Beavis is a character from the animated MTV show Beavis and Butt-Head, known for his stupidity, ugly appearance, and juvenile personality.

Where does Beavis come from? 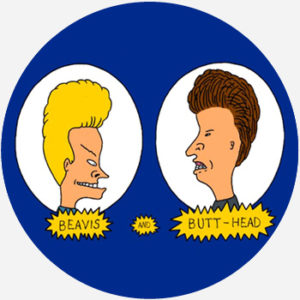 Beavis first appeared in an animated short called Frog Baseball, presented at a 1992 international animation festival. Later that year, MTV bought the short and hired Mike Judge (the creator) for an ongoing series with the characters Beavis and Butt-Head.

Judge later said that he named Beavis after a neighbor named Bobby Beavis, who, he was quick to say, was nothing like his character, a caricature of a delinquent, grunge-loving teen.

Beavis and Butt-Head ran on MTV from 1993 to 1997, rebooted for one season in 2011. The show featured the title characters idly causing trouble and criticizing popular music videos of the day. Over the course of the series, Beavis became known for his dim wit, crass sense of humor, underbite, large forehead, unusual laugh, raspy and nasal voice, and fascination with fire.

In early episodes, Beavis would chant “Fire! Fire!” while playing with fire. In 1993, the show was blamed for inspiring a fire set by a five-year-old. In response, references to Beavis‘s pyromania were dropped from later episodes, but the creators later alluded to the incident in a scene where Beavis, working in a fast-food burger joint, punningly cheers, “Fryer! Fryer!”

Another recurring gag is Beavis‘s alter ego, Cornholio. When Beavis consumes too much sugar or caffeine, he pulls his shirt over his head, acts erratically, and calls himself “the Great Cornholio.” In this state, he often mutters nonsense and repeatedly demands “TP [toilet paper] for my bunghole” or “bungholio.”

Daaaaaamn, I just realized HOW MUCH the Trump boys look like Beavis & Butthead. Not quite as smart, though.
@CapnRumslinger, February, 2018
Tory Lanez has the single worst jumpshot I've ever seen and you want me to listen to this nigga rap? No. Ol' Megamind, Code Lyoko, Beavis and Butthead forehead ass nigga, kick rocks.
@LolitaZenpie, March, 2018
With the release of Rivers of Nihil’s third album Where Owls Know My Name just around the corner, we figured we’d have some fun when bassist Adam Biggs, guitarist Brody Uttley an vocalist Jake Deiffenbach stopped by The MetalSucks Mansion: we put them in front of a playlist of music videos of all kinds and let the guys freestyle over it, Beavis and Butt-Head style.
Metal Sucks (website), February, 2018
SEE MORE EXAMPLES

Beavis is colloquially used in speech and writing largely as a humorous or nostalgic reference to the popular, and controversial, character. He’s also referenced in memes and GIFs online. His Cornholio persona may be invoked to describe a person with their shirt over their head or someone acting hyper or off-the-wall. People may also quote his “Fire! Fire!” while lighting fire or using a lighter.

People sometimes compare others to Beavis as an insult. The comparison may mock someone’s ugly appearance or lack of intelligence. Since Trump’s 2016 campaign for president and subsequent election, critics have likened his son Eric Trump to Beavis (and Donald Trump Jr. to his counterpart, Butt-Head).

Fans of the show, however, sometimes embrace likeness to the character, featuring an image of Beavis as a social-media avatar, for instance.

This is not meant to be a formal definition of Beavis like most terms we define on Dictionary.com, but is rather an informal word summary that hopefully touches upon the key aspects of the meaning and usage of Beavis that will help our users expand their word mastery.