Who is Clayton Bigsby?

A fictional character created and portrayed by comedian Dave Chappelle, Clayton Bigsby is a blind black man who mistakenly believes that he’s white and holds bigoted attitudes toward his own race.

Where does Clayton Bigsby come from? 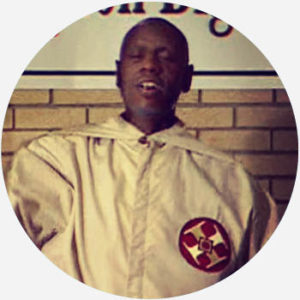 Clayton Bigsby first appeared in a sketch on the debut episode of Comedy Central’s Chappelle’s Show on January 22, 2003. The sketch is stylized as a satirical PBS Frontline report that documents the rise and fall of Clayton Bigsby, a successful author who’s described as a “black white-supremacist.”

Woefully unaware of his true identity, Bigsby levels profane tirades against black people throughout the sketch. In one pivotal scene, Bigsby speaks to an audience of white supremacists while donned in Ku Klux Klan robes. At the request of an attendee, he removes his hood, leaving the audience flabbergasted once it’s revealed the popular white supremacist is actually black. Bigsby even goes on to divorce his wife of 19 years—because she loved him: a black man.

According to Chappelle’s Show co-creator Neal Brennan, Clayton Bigsby was loosely based on Dave Chappelle’s mixed-race grandfather, who was blind and experienced racial discrimination in the 1960s.

The controversial two-part sketch featuring Clayton Bigsby has received acclaim and criticism for its jarring and ironic portrayal of overt racism and bigotry. Ebony magazine, for instance, lauded the character for “bringing stereotypes and harsh realities of a culture to the mainstream” and as a commentary on the absurdity—the literal and figurative blindness—of racism. Chappelle, on the other hand, has said he’s been accused of “setting black people back” with the comedy sketch.

When you consider all aspects of Clayton Bigsby, you realize that his blindness is a representation of what racism truly is [...]the fact that people are all equal.
Dana Hanson-Firestone, TVOvermind, August, 2017
It's no surprise that the comedian who started the first episode of “Chappelle's Show” with a sketch about Clayton Bigsby, a black blind man who thinks he's white, is drawn to a white woman who identifies as black. Mr. Chappelle asks emphatically: How far is Ms. Dolezal willing to go to become black?
Jason Zinoman, The New York Times, August, 2017
I didn't check for Dave till half baked! Was just a comic to me. Chappelle show was the shit 1st season! Clayton Bigsby, Tyrone Biggums, Mad Real World, Roots! I was vividly watching like he about to get cancelled for keeping it 💯 - Yea I SOLO, was hard to miss! But I'm a fan!
@Bushrodd, February, 2018
SEE MORE EXAMPLES

Clayton Bigsby is primarily used in allusion to or discussion of the character, sketch, and show.

Clayton Bigsby is sometimes used as a derogatory nickname for self-hating people. For example, a black Donald Trump supporter who denounced Black Lives Matter was labeled a “real-life Clayton Bigsby” by The Root in 2017.

This is not meant to be a formal definition of Clayton Bigsby like most terms we define on Dictionary.com, but is rather an informal word summary that hopefully touches upon the key aspects of the meaning and usage of Clayton Bigsby that will help our users expand their word mastery.