Who is Coconut Head?

Coconut Head is a recurring character on the TV show Ned’s Declassified School Survival Guide. Coconut head is also a nickname for people, especially kpop stars, with a hairstyle resembling a bowl cut.

Where does Coconut Head come from? 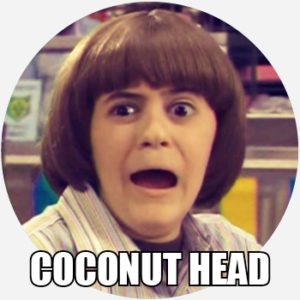 The minor character Coconut Head (Rob Pinkston) appeared in the first episode of the Nickelodeon TV show Ned’s Declassified School Survival Guide, which premiered  in September 12, 2004. His real name is never revealed, but he earns the nickname Coconut Head because his hair looks like a coconut due to a bad haircut before the first day of school. His hair never grows back out, and the nickname sticks. The character is seen as awkward and dorky, which is exacerbated by his haircut. He’s also seen as quiet, cheerful, sensitive, and easily scared, making him a further target of bullies.

Coconut Head may have remained relevant because there’s always people with a similar haircut, leading to possible taunting comparisons between them and the character. As a point of nostalgia for many people, Ned’s Declassified School Survival Guide sometimes comes up as a point of discussion, which may lead to references to recurring characters like Coconut Head.

The term likely gained more traction beyond the character as K-pop groups enjoyed more popularity starting in the 2010s, independent of and without reference to the Ned’s character. Boys in these groups, perhaps in an effort to look more appealing, sometimes don a haircut that has the round shape and brown color of a coconut, earning them the nickname. This nickname is affectionate and is used by fans in a flirtatiously teasing way.

They cut Sophia’s bangs a little too short and I swear she looks like coconut head from Ned’s declassified 😅😂
@alflores270481, February, 2018
can someone please come get their coconut head....... caught him trying to steal my heart. no fine, will pay you to take him.
@loonarmy, February, 2018
Oh, and Coconut Head, played by Rob Pinkston, ditched his hilariously iconic wig for his actual luscious head of hair.
Stacey Grant, MTV, September, 2015
SEE MORE EXAMPLES

Online, people draw comparisons between the Ned’s character and other people who have similar haircuts, which typically look like some variety of a bowl cut. Some post pictures of themselves or others online and declare that they look like Coconut Head in real life. However, people can also be called coconut head independent of a reference to the character himself, given that the epithet is given to anyone whose hair looks like a coconut.

There’s a significant discrepancy between Coconut Head’s actor Rob Pinkston and his character. Fans of the show draw comparisons between the ridiculous hair of Coconut Head and the actor, who is considered attractive with great hair.

Coconut head is also a fan nickname for Jungkook of the K-pop band BTS due to his haircut. At first, fans compared his hair to pictures of coconuts, earning him the nickname coconut head. The nickname exists across the fandom, appearing in tweets, videos, and more. In fact, it became well-known enough to be an easy shorthand reference for Jungkook. Other kpop stars, occasionally including members of Jungkook’s own group who sport a similar haircut, may also be called coconut head.

From the mid-19th century to early 20th century, coconut-headed was used as a slur for black people. Samoan-Americans have also been derogated as coconut-heads, so be mindful of the term’s historic racism if using it.

This is not meant to be a formal definition of Coconut Head like most terms we define on Dictionary.com, but is rather an informal word summary that hopefully touches upon the key aspects of the meaning and usage of Coconut Head that will help our users expand their word mastery.