Who is Chuck Bass?

Chuck Bass is the name of a character from the Gossip Girl book series and television adaption. Edward Westwick plays him on the TV show.

Where does Chuck Bass come from? 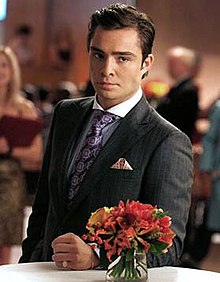 Chuck Bass first appeared in the novel Gossip Girl, published in 2002. He went on to appear in the pilot of the subsequent television show in 2007. His character was considerably different in the novels versus the television series. However, in both, he is considered at his core to be handsome, rich, and something of a womanizer. Over the course of the TV series, he developed slowly into a character with more emotional depth as more of his personality is revealed, and as his relationship with another key character, Blair Waldorf, progresses. He remains, however, a controversial figure thanks to his antiheroic characterization.

—So the next time you forget you’re Blair Waldorf…
remember I’m Chuck Bass, and I love you. pic.twitter.com/9tEUEIUHCu

“'m Chuck Bassing today, chauffer and all
@TheKingsKidd, October 21, 2013
So there is this man at my mom's job. He's stopping her from getting a promotion. He lucky he live in Va. or I would Chuck Bassed his ass.
@MissCB_Fab, July 27, 2011
Man I still got it just chuck bassed that ass she drop that number like she gonna drop that ass for me haha
Leon Shelton, Facebook, November 18, 2012 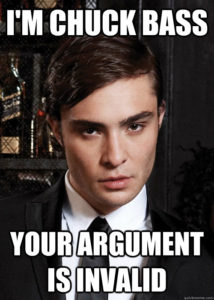 The character is known for his catchphrase, “I’m Chuck Bass.” It’s used to demonstrate both his wealth and somewhat arrogant personality, as well as—later—his personal development, as his relationship with Blair strengthens. Fans frequently reference this catchphrase.

Chuck Bass’s name can also be used as a verb in different contexts, based on the character’s behavior in the show.  To Chuck Bass can mean to behave like a womanizer, often also bringing to mind connotations of luxury and wealth. It can also mean to behave in a scheming or manipulative way, especially to bring about misfortune for someone. The term is also used to describe the character’s development throughout the show’s seasons–from a one-dimensional antagonist into a more complex, nuanced, and sympathetic antiheroic figure.

This is not meant to be a formal definition of Chuck Bass like most terms we define on Dictionary.com, but is rather an informal word summary that hopefully touches upon the key aspects of the meaning and usage of Chuck Bass that will help our users expand their word mastery.