Fonzie is a character from the 1970–80s television show Happy Days. He is celebrated for his cool and rebellious attitude, his pompadour, and hip leather jacket.

Where does Fonzie come from? 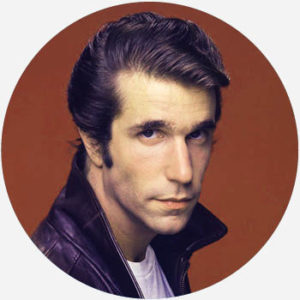 Set in the 1950s, Happy Days is a sitcom centered on the Cunningham family. The character Arthur Fonzarelli, nicknamed Fonzie or the Fonz, was played by Henry Winkler. He first appeared as a minor character, an Italian-American biker with a tough and street-smart attitude. He spent most screen his time at the diner Richie and his friends frequented, giving them life advice.

Fonzie quickly became popular with viewers and got more air time. He acquired a change in wardrobe, switching from a windbreaker to his now iconic leather jacket and developed into a big-brother figure. Eventually, Fonzie moved in with the Cunninghams, cementing his part as a main character in the series’ lineup. 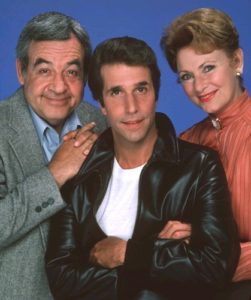 Fonzie was known for his Greaser look, motorcycle-riding, and thumbs-up gesture which accompanied his catchphrase, “Ayy.” Thanks to his popularity, there is a bronze statue of him in Happy Days’ setting, Milwaukee, Wisconsin.

What is it with the thumbs up all the time? Does he think he's Fonzie now?
@Ra_Khorakhty, May 2017
First there was ‘Happy Days,’ where a charming show about growing up in the ’50s was revamped to focus on the Fonz. And now there’s ‘Buffy the Vampire Slayer,’ which has been all but destroyed by the Fonzie of our time: Spike.
Jamie J. Weinman, “Why Spike ruined “Buffy the Vampire Slayer”,” Salon, May 2003 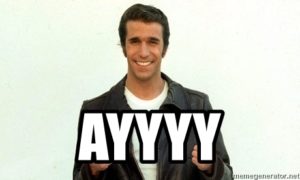 ru.memegenerator.net
“Remember when Fonzie jumped the shark on 'Happy Days'? Unfortunately we do, too.”
Yahoo Facebook (September 25, 2016)
SEE MORE EXAMPLES

Fonzie’s distinctive qualities make him a popular subject for comparison. Breakout characters who started out small but graduated to major status might be designated as having “the Fonzie syndrome.” Such a character might also be known as the Fonzie of their show. Being the Fonzie of something can designate coolness, rebelliousness, or a facility for attracting ladies.

Kirk is the Fonz of #StarTrek #ThursdayThoughts pic.twitter.com/gMombIIn4q

If Lemmy was my life coach, Fonzie was my prep school teacher showing us how to break the rules with style. Happy birthday Henry Winkler pic.twitter.com/AKqh9g5cE8

An important phrase associated with Fonzie is jump the shark. When a show or series jumps the shark, it means it is past its prime, especially when resorting to sensational, gimmicky content to attract declining viewers. The phrase originates from an episode when Fonzie improbably water-skis over a shark, which many fans considered to be the moment the show started going downhill.

"Happy Days gave us the phrase "jump the shark," but at least Fonzie never challenged a shark to a fistfight." http://ow.ly/38Z7Z

Hope everyone got out to vote! #ElectionDay #Fonzie 2020? pic.twitter.com/XYtdRgoUR7

This is not meant to be a formal definition of Fonzie like most terms we define on Dictionary.com, but is rather an informal word summary that hopefully touches upon the key aspects of the meaning and usage of Fonzie that will help our users expand their word mastery.