What does 🏍️ Motorcycle emoji mean?

Are you ready to ride? The motorcycle emoji, 🏍️, depicts a motorcycle, a motorized bicycle popular for racing, transportation, and off-road adventures.

Where does 🏍️ Motorcycle emoji come from? 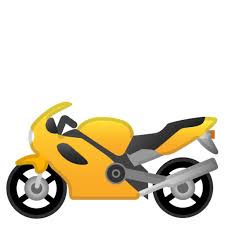 The appearance of the motorcycle emoji, officially called Racing Motorcycle by Unicode, varies across different platforms, as shown in the screenshot from Emojipedia below. It may also popularly go by motorbike emoji.

Some platforms, such as Microsoft, feature a person on the bike, while most, including Apple and Google, feature a driver-less vehicle. Color ranges widely, too, but major vendors show the front of the bike facing left. They also depict a vehicle that suggests a superbike used in motorcycle racing. Apple’s design, however, resembles a cruiser motorcycle.

The motorcycle emoji is not to be confused with the motor scooter emoji, 🛵.

The motorcycle emoji is most widely used by motorcycle lovers, be it riders, racers, fans of motorcycle racing, or bike collectors.

I love fall weather. Can't wait to get out in my leather and ride 🏍️

Cannot wait to get my hands on this beauty! British manufacturing at it's best! 🏍️🇬🇧 pic.twitter.com/FXQ7FO2vhr

Law enforcement, however, may use the motorcycle emoji to remind others not to drive too fast.

#Raining ⛈️🌧️🌩️🌨️⛈️ : You should always drive at a slower speed when the roads are wet. The faster you drive in a rainstorm, the more likely you are to have an accident. 🏍️🚗🚕🚙🏍️

Hope everyone is enjoying the nice weather……please note we will be targeting various routes on Bank Holiday Monday, engaging with motorcyclists and asking them to slow down – its not all about speed #dontriskit 🚓🏍️ pic.twitter.com/dsWWSHxlcQ