What does flux capacitor mean?

A flux capacitor refers to a fictional a piece of technology that allows time travel in the popular science-fiction film series Back to the Future.

Where does flux capacitor come from? 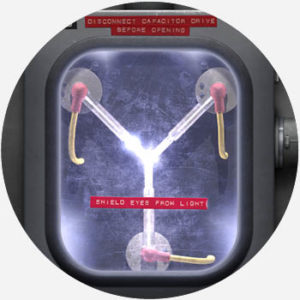 The flux capacitor is a piece of technology in the 1985 time-travel film Back to the Future and its sequels. Although it’s described as the thing that makes time travel possible, the precise mechanism it works by isn’t ever explained. It simply consists of a box with three flashing lights connected in a Y shape, installed in the film’s iconic time-traveling vehicle, the DeLorean, a short-lived sports car famed for its doors, which open up rather than out. The flux capacitor was invented by Doc Brown (Christopher Lloyd), and allows Marty McFly (Michael J. Fox) to time-travel.

A flux capacitor is a bit of fun sci-fi technobabble made up of two pieces of genuine scientific terminology. In physics, flux is the amount of something (like electricity) that’s passing through a given object’s surface and a capacitor is a device that stores electronic charge. Some clever engineers, nodding to the film, have built contraptions they called flux capacitors—though these real-life fabrications have yet to achieve time travel.

“Did you know you can still buy a new DeLorean, straight from the factory? Flux capacitor not included.”
CNET Facebook (October 4, 2015)
“I did this once in engineering. "Oh, you're rocket isn't working? You probably have a broken flux capacitor. Talk to Mr. Regan about it, he knows how to fix those." "Oh, okay. Thanks, TGOT!" About 5 minutes later: 'TGOT, I actually hate you.'”
TGOT Reddit (September 24, 2012)
“I just head [sic] a massive groaning from the flux capacitor as the entire country shifted 60 years into the past #BrexitDay #Article50”
Steve Evans @stevesplan Twitter (March 29, 2017)
SEE MORE EXAMPLES

Flux capacitor is still mostly used in reference to the film and to time travel more generally. If you’re talking about how dreadful the current state of your country is, you might joke that “if it gets much worse I’ll just have to build a flux capacitor.” It can also be used to suggest that a policy or piece of information is outdated, as if it’s throwing people back into the past, referencing the basic plot of the original Back to the Future, which sends Marty McFly from the 1980s to the 1950s. You might say, for example, “Did someone activate the flux capacitor? That law belongs in 1965.”

Since flux capacitor has the ring of genuine engineering terminology, being made of existing scientific terms, it’s sometimes used as a practical joke. Someone who hasn’t seen Back to the Future and doesn’t know very much about physics might be told to go and get a flux capacitor for their car or that they need to replace the flux capacitor on their computer.

It’s popular to build replica flux capacitors, so you can find instructions online for creating these. Merchandise such as key chains and cell phone chargers based on the device are also common. In 2015, auto company Ford also offered a flux capacitor upgrade on Fiesta cars as a humorous homage to the film. The offering joined in on various celebrations on October 21, 2015, which was the day Marty McFly travelled to the future in the 1989 sequel to the original film, Back to the Future Part II.

This is not meant to be a formal definition of flux capacitor like most terms we define on Dictionary.com, but is rather an informal word summary that hopefully touches upon the key aspects of the meaning and usage of flux capacitor that will help our users expand their word mastery.