What does Forky mean?

Forky is a toy spork in the animated film Toy Story 4. He is popular for his absurd appearance and hilarious antics—as well as his very moving and relatable existential crisis over whether he is a piece of trash or lovable toy.

existential crisis, bing bong, hello darkness, my old friend, Case of the Mondays, 🧸 Teddy Bear emoji, I love you to the moon and back

Where does Forky come from? 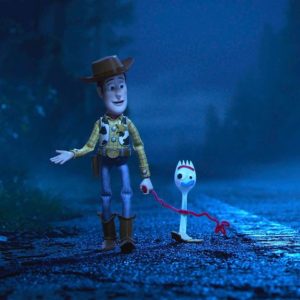 Meet Forky in this new clip from #ToyStory4. See it in theaters June 21. pic.twitter.com/nv2xYT4FlY

Forky is a spork (found in a trashcan) created into a toy by Bonnie during craft time at kindergarten. He has popsicle sticks for feet, red pipe cleaners for arms, googly eyes, and a very expressive blue mouth and red unibrow.

Forky becomes Bonnie’s favorite toy, but he faces an existential crisis: He thinks he’s just trash and keeps trying to throw himself away. When Bonnie takes him and her other top toys on a family road trip, an anxious Forky escapes, saying: “I was meant for soup, salad, maybe chili. And then the trash! I’m litter!”

Despite his initial jealousy about Forky, the toy sheriff Woody (Tom Hanks) ventures out to reunite him with Bonnie—and helps Forky embrace his purpose and worth in life as a toy, bringing happiness, play, and comfort to Bonnie.

If I'm a Disney Character, Im Forky because I'm Trash :<
@Cabantud_Joshua, October 2013
The part I liked best in Toy Story 4 was Forky, born into the world screaming into the dark and knowing only that it wants to die.
@psuedofolio, July 2019
There’s a quiet contemplativeness at the movie’s heart, exemplified by a long scene in which Woody and Forky discuss the meaning of life as a plaything.
Dana Stevens, Slate, June 2019
SEE MORE EXAMPLES

As with the Toy Story 4 movie itself, Forky was a hit, inspiring many laughs from young and old alike—and, of course, a lot of merchandise and memes.

Forky constantly calling himself trash in toy story 4 is a MOOD pic.twitter.com/d3BDZqYxB2

my sister and one of my friends are on holiday and they both took a forky figure with them… i receive approximately 20 pictures a day of forky having a better time than me pic.twitter.com/gT25ZRxPSu

Forky also resonated more deeply in popular culture. His crisis and questioning about his purpose in life struck a chord—and sounded brighter notes—at a time when many people feel under threat by climate change, gun violence, and political divisions.

forky spends approximately 40% of toy story 4 repeatedly and with great anxiety trying to dive into the trash and i, for one, am glad that someone finally nailed millennial representation in film once and for all pic.twitter.com/qIfEi9tVqK

This is not meant to be a formal definition of Forky like most terms we define on Dictionary.com, but is rather an informal word summary that hopefully touches upon the key aspects of the meaning and usage of Forky that will help our users expand their word mastery.