What does bing bong mean?

Bing bong is a nonsense phrase once used by President Donald Trump, which is now repeated as a shorthand criticism of his idiosyncratic speaking style.

Where does bing bong come from? 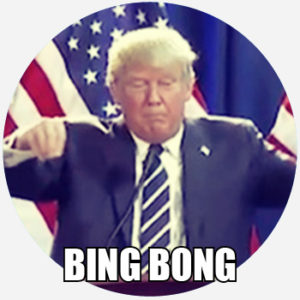 Bing bong is a gibberish phrase that rose to prominence. It had no particular meaning until 2015, when then US Presidential candidate Donald Trump used it in a speech about special interest campaign donors, stating: “Jeb Bush or Hillary, or one of these politicians, all controlled by lobbyists and special interests—and donors, people like me from previous months—total control. Bing bing, bong bong bong, bing bing. You know what that is, right?”

Contrary to his stated intention, Trump’s sound effects elicited confusion—or mockery—from most of the internet.

It’s unclear why he used the words bing bong, though it could be because the Disney/Pixar film Inside Out was released that same year, featuring a popular character named Bing Bong. It could also be drawn from the “Bing Bong song,” which was featured on the children’s television series Peppa Pig since the early 2000s. Bing bong may also draw on the onomatopoeia of ding, used to imitate the sound of a cash register, as well as the reduplicative ding-dong, slang for a “stupid person.”

The same day that Trump said bing bong, CNN posted a clip to its Vine, which was then shared in news posts across the web.

Only a day later, Jonathan Mann posted a music video to YouTube which spliced Trump’s “bing bong” quotes in with the “Crazy Frog Bros” (another meme). This set off a wave of Donald Trump memes, particularly on Vine, which featured his bing bong lines inserted into numerous music videos, almost always in a mocking fashion.

The meme arguably reached its zenith when it appeared in a 2018 episode of the X-Files, where it was deliberately used to satirize Trump.

When used in relation to Donald Trump, the phrase bing bong, or any variant thereof, is almost always intended as a criticism, much like Trump’s notorious typo, “covfefe.”

Bing bong is a shorthand way of mocking Trump’s unusual, rambling speaking style, as well as his reliance on short and repetitive words (terrific, moron, very, great, bing bong, etc.). This speaking habit was made especially notable in December of 2015—right as the bing bong meme was really kicking off—when the candidate infamously told audiences that, “I’m very highly educated. I know words, I know the best words.”

Bing Bong is also a popular Disney/Pixar character from Inside Out, who has no connection to Donald Trump. The name might be intended as a goofy, clumsy, bouncy take on sing-song or ding-dong.

This is not meant to be a formal definition of bing bong like most terms we define on Dictionary.com, but is rather an informal word summary that hopefully touches upon the key aspects of the meaning and usage of bing bong that will help our users expand their word mastery.