What does binch mean?

Where does binch come from? 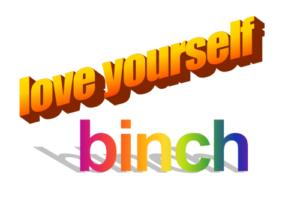 The slang bitch, long a slur against women, has been variously altered in spelling, as seen in the likes of betch and bish. Such euphemisms, sometimes called minced oaths, are common in English. Consider dang for damn, fudge for fuck, and heck for hell.

Until the mid-2010s, binch is found rarely online, often as an apparent typo for bench, bunch, and, yes, bitch. It was first entered as a workaround for bitch on Urban Dictionary in 2011.

In late 2014, however, binch, as a deliberate substitute for bitch, saw a jump in use online and began spreading.

A kid on tumblr calls people "binch" instead of "bitch." I don't know if it's a typo or what, but I love it. All these binches is my sons.

Why binch? Binch and bitch are very close in pronunciation and spelling, so binch may just have emerged as a softened, less offensive take on bitch. It’s also a way around profanity filters.

I yelled at my sister kno the phone and she hung up on me lol. It takes a lot to get me mad this isn't the first time binch

Indeed, Twitter notably suspended accounts starting in 2017 that directed profanity at verified accounts in an effort to crack down on abuse, likely giving binch a lift.

Mom: you're showing your stomach??? / Me: YAS BINCH
@patheticgirrl, January 2015
For anyone who’s concerned with developing a comedic voice, starting with a point of view is the first step. Might as well make it a helpful one, binch.
Bowen Yang by Mahita Gajanan, Time, February 2019

Binch is used just like bitch. It can be used in a positive, reclaimed way…

What a lucky binch I am pic.twitter.com/3gyQFxTzW5

I’m the skinniest binch in the market place rn pic.twitter.com/CFChCvImUW

…or just like the vulgar slang it is based on.

.okay if you’re from Australia reply to this tweet and don’t be a binch

Most often, however, binch is meant to be playful.

Its continued use may be due to the popularity of deliberate misspellings online, as seen in DoggoLingo and LOLcat.

Someone really came at me n said i only chose @itsnellemusic and @echodmusic cuz they were asian. Lol.

Binch for bitch is not to be confused with “The Binch,” a satirical poem by Robert Suggs modeled on Dr. Suess’s How the Grinch Stole Christmas about the the 9/11 terrorist attacks. The poem figures the Binch, based on the Grinch, as an Islamic terrorist. The poem spread online, frequently misattributed as something Suggs made to help explain 9/11 to children at an Atlanta hospital.

Nor is binch to be confused with Binch, a cookie made by the South Korean company Lotte.

This is not meant to be a formal definition of binch like most terms we define on Dictionary.com, but is rather an informal word summary that hopefully touches upon the key aspects of the meaning and usage of binch that will help our users expand their word mastery.