What does bigly mean?

Bigly is a word popularly believed to have been made up and used by US President Donald Trump, meaning “to a large amount” or “with great intensity.” It is most often used in mockery of Donald Trump’s speech, mannerisms, and behavior.

Where does bigly come from? 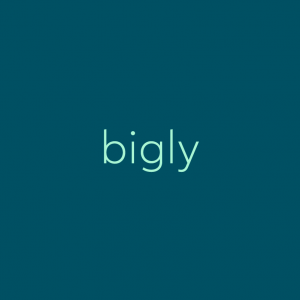 On September 26, 2016, the first 2016 presidential election debate took place between candidates Hillary Clinton and Donald Trump. During this debate, candidate Trump addressed Clinton and said what many viewers heard as: “I’m going to cut taxes bigly, and you’re going to raise taxes bigly, end of story.”

For many, this was the first time they had heard Trump say this strange bigly, deeming it an idiosyncrasy or grammatical error, but Trump had apparently been saying bigly throughout his campaign.

In transcripts of the September debate, the Associated Press and other major media outlets wrote that Trump had said big league, meaning “big-time” or “in a major way”—not bigly. Most attributed the confusion to Trump’s New York accent, which accounts for other “Trumpisms” such as yuge. In an October 2016 interview, Trump himself looked to settle the debate that he had always said big league.

The evidence seems to support Trump’s side, as he has never once used bigly in any of his (many, many) tweets whereas, he has been using big league since at least 2012.

Housing prices will be going up big league–a great time to buy–good luck!

The final wrinkle of the story, though, is it turns out that bigly actually is a real word, albeit an obscure and archaic one meaning “greatly.”

Was your car among 33 towed because of Trump’s visit? It’ll cost you — bigly
Matt Campbell, The Kansas City Star (headline), July 2018
Trump’s penchant for skipping homework will cost him bigly every time he has a conversation with Pelosi. She will nail him to the wall with one arm tied behind her back.
@Mass57th, December 2018 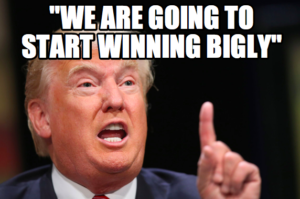 Bigly is most often used as a synonym for “big” or “greatly” in reference to President Donald Trump, usually as part of memes, criticism, or jokes about him. A comedian impersonating Trump? Expect to hear bigly as part of the schtick. 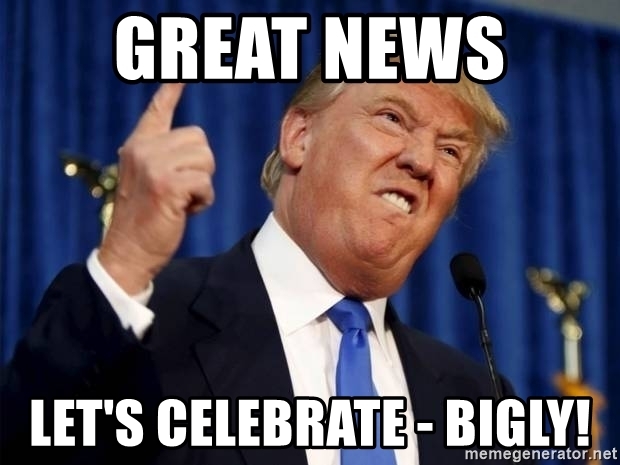 This is not meant to be a formal definition of bigly like most terms we define on Dictionary.com, but is rather an informal word summary that hopefully touches upon the key aspects of the meaning and usage of bigly that will help our users expand their word mastery.