What does birb mean?

Birb, also spelled as berb, is a deliberate misspelling of bird used in internet slang such as DoggoLingo. It’s used as a playful way to refer to cute birds, particularly pet birds.

Where does birb come from? 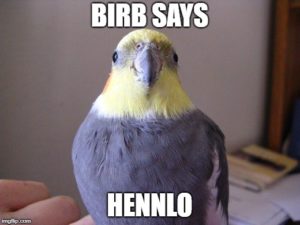 In internet slang such as LOLcats, Doge, and DoggoLino, misspellings are used as cute and humorous ways to fawn over our pets. For example, DoggoLingo has smol (“small”) and chonky (“chunky”) and before them was the snek (“snake”) meme. Birb continues in this tradition, meant as an adorable term for “bird” in posting pictures and memes about them.

Early instances of birb can be found on Twitter by fall 2012. In November, @ProBirdRights, an account known for its intentionally humorous misspellings and incorrect grammar, simply tweeted birb. In September 2012, another account referred to an Angry Birds character as a birb. There are yet earlier instances, but they appear to be nicknames, handles, typos, or other references to other, non-bird concerns.

Freddy Is a angry Birb… Love it pic.twitter.com/0kz4b6l4

In April 2014, a post was made in the subreddit /r/funny featuring a GIF of a blue parakeet reacting to its stuffed animal twin with the caption “We are birb. We must dance.” In October 2014, birb was added to Urban Dictionary and given its own subreddit /r/birbs, dedicating to our feathered friends.

There is no difference between the meaning of birb and berb, although birb is more common. When birbs screech in DoggoLingo, they are humorously said to screm.

I can't get over the cute birb faces in this show. Just go watch Tuca & Bertie.
@thegoodnaysayer, May 2019
A dollop of Kinglet. I love the shape of these birds 😍 #birds #birding #Michigan #birb
@suemoo8, May 2019
Getting extra attention today, outside birds are telling me about all the rain and flooding but I am cozy birb
@fionnualatiel, July 2019
SEE MORE EXAMPLES

Birb is frequently, and affectionately, used when referring to pictures and videos of birds doing silly things, such as dancing, singing, or interacting with humans or other critters.

This is not meant to be a formal definition of birb like most terms we define on Dictionary.com, but is rather an informal word summary that hopefully touches upon the key aspects of the meaning and usage of birb that will help our users expand their word mastery.