GIR is a robot character from the TV show Invader Zim who is typically disguised as a green dog. He often behaves in unpredictable and strange ways.

Where does GIR come from? 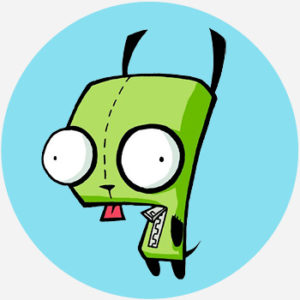 GIR appeared in the first episode of Invader Zim, which aired on March 30, 2001. In this episode, GIR was assigned as a robot servant to Zim, an alien tasked with taking over Earth. Immediately upon his introduction, it becomes clear that GIR is unhelpful, annoying, and erratic. This is unlike other robots of his kind, known as SIRs (Standard-Issue Information Retrieval Unit). When Zim’s superiors refer to him as GIR, Zim asks what the G stands for, to which GIR cheerfully replies “I don’t know.” His name may suggest grr, onomatopoeia for a dog’s growl.

With his frequent inane outbursts, GIR quickly became the patron saint of many teenagers and children, as their humor is often reliant on saying the most random things possible. Because of this, he began to appear on DeviantArt, an art-submission website that has a large population of that demographic. In fact, as of 2018, 350,000 submissions return on a search for GIR.

As his popularity grew and his cult following was achieved, marketers began to take notice, which netted him many merchandise opportunities. He quickly popped up in stores, most notably the young-adult retailer Hot Topic.

For a while, many forgot about GIR. However, after over a decade without new material, he will appear in a new TV movie revolving around the Invader Zim cast, set to air sometime during or after 2018.

Indeed, it becomes obvious very quickly that GIR is not completely right in his positronic head.
George Dvorsky, io9, May, 2012
I work with a 23 yr old who is real life Gir from Invader Zim except way more annoying and way less cuter
@donncham, January, 2018
My roommate walks into the room and makes psycho noises like she's Gir from Invader Zim on drugs. Send help.
@abitha_25, January, 2018
SEE MORE EXAMPLES

As a character, GIR usually appears on merchandise, such as shirts, hats, or mugs, which is usually emblazoned with one of his quotable lines. One of his most well-known quotes is the Doom Song, which is merely the word doom repeated for what appears to be hours. Though not an actual quote, GIR is also often mentioned with the word tacos, as he screams about them.

GIR has a strong presence on YouTube, where he appears in over one-million videos, many of which compile his best moments and invariably include his quotes.

People may also use GIR to draw comparisons to others, sometimes saying that annoying people or characters remind them of GIR.

This is not meant to be a formal definition of GIR like most terms we define on Dictionary.com, but is rather an informal word summary that hopefully touches upon the key aspects of the meaning and usage of GIR that will help our users expand their word mastery.