Who does George Glass mean?

George Glass is an imaginary boyfriend of the character Jan Brady from the 1960–70s sitcom The Brady Bunch.

Where does George Glass come from? 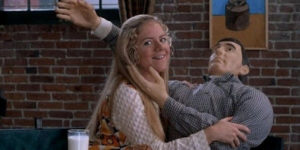 Jan Brady dreamt up George Glass in Season 2 of The Brady Bunch in the episode “The Not-So-Ugly-Duckling,” which first aired on November 20, 1970. In the episode, Jan has an unrequited crush on a boy, Clark Tyson, but he is more interested in her sister Marcia.

After Jan fails to attract Clark, she hides herself in her room, defeated and depressed. Her parents, Mike and Carol, attempt to cheer her up. During their talk, Jan claims to already have a boyfriend named George Glass, his last name improvised from a drinking glass Jan sees on a table.

Jan referred to her fictional boyfriend several times over The Brady Bunch’s run, usually in arguments with Marcia. In the 1996 film A Very Brady Sequel, Jan runs into an actual boy named George Gunther Glass (Michael Lindburg) at the exact time she needs a date to a wedding, a 26-year payoff to the joke.

Relationship Status: George Glass
@NylonMag, June, 2016
Allen Craig is to the Cardinals as George Glass was to Jan Brady. I'm not sure he's real.
@AnswerDave, July, 2010

George Glass is usually brought up in references to The Brady Bunch, always at poor Jan’s expense. 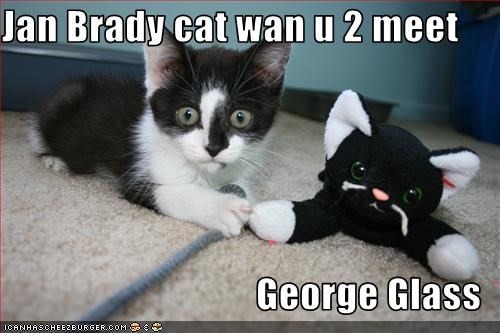 George Glass is also sometimes used for any made-up romantic partner or person.

Is his name George Glass? https://t.co/UeEe0Nsud5

George Glass is even occasionally seen with his female equivalent in pop culture, my girlfriend from Canada.

Dylan is real people! He's the son of my supermodel girlfriend's (she lives in Canada , you haven't met her) sister who married George Glass pic.twitter.com/VleBmQCeiC

This is not meant to be a formal definition of George Glass like most terms we define on Dictionary.com, but is rather an informal word summary that hopefully touches upon the key aspects of the meaning and usage of George Glass that will help our users expand their word mastery.